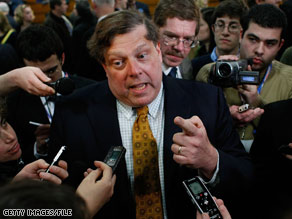 In a March 2007 memo, Mark Penn, Clinton's former chief strategist, wrote, "all of these articles about his boyhood in Indonesia and his life in Hawaii are geared toward showing his background is diverse, multicultural and putting that in a new light. Save it for 2050," according to Atlantic magazine writer Joshua Green.

"It also exposes a very strong weakness for him -- his roots to basic American values and culture are at best limited. I cannot imagine America electing a president during a time of war who is not at his center fundamentally American in his thinking and in his values," Penn wrote.

Penn was forced out of his position as chief strategist in April after revelations that he lobbied for a U.S.-Colombia trade deal on behalf of the Colombian government despite Clinton's opposition to the measure. Penn, however, never left the campaign entirely.

The magazine article was posted on The Atlantic's Web site Monday evening. It will also appear in the September edition of the magazine, which is expected to hit newsstands August 19.

Watch Green explain why he got the Clinton documents »

"Her top adviser suggesting that angle is striking," Jonathan Martin of Politico said. "These are the kinds of things you see in e-mails that you see circulating about Obama in this sort of subterranean smear campaign against him. You never see these things voiced by the candidates."

Green noted that Clinton did not pursue the strategy Penn suggested during the contentious Democratic primary battle, which resulted in Obama winning more delegate than the former first lady and locking up their party's presidential nomination.

"Had Sen. Clinton followed Mark Penn's advice, it would have caused her more angst than good," said James Carville, a Democratic strategist and a CNN contributor.

The revelations could keep any remaining animosity between the Obama and Clinton camps alive, Green said.

Watch how the Democrats are trying to unify »

"What's going on right now is that a lot of Obama supporters and fundraisers are trying very hard to retire Sen. Clinton's debt. One reason they've had difficulty doing so is the dislike among Obama people for Mark Penn specifically," Green told CNN on Tuesday. "They tend to blame him for the nature of these negative attacks."

In the Atlantic article, which is based on internal Clinton campaign memos and e-mail messages, Green highlighted bitter fighting among Clinton's staff, writing that her advisers "couldn't execute strategy; they routinely attacked and undermined each other and Clinton never forced a resolution."

Frustrations over how the New York senator's campaign ended drove many Clinton staffers to turn over the campaign's internal communication, Green said.

"This was a historic campaign. People thought it would be an easy march to the nomination and then an easy win in the fall. And instead, we've had this historic presidential election where she's collapsed and a first-term senator has won the Democratic nomination," Green said. "So I think it's just the nature of the defeat has made a lot of people frustrated, and there's certainly people out there who really want the kind of full story to come to light so people can understand exactly what happened."

The internal communication suggests that the lack of clear lines of authority within the campaign meant that issues that ultimately led to Clinton's defeat -- her lack of support in the Iowa caucuses, the absence of a strategy to capture delegates after the Super Tuesday primaries and her failure to prepare for a protracted primary fight -- went unaddressed for months, Green wrote.

"What is clear from the internal documents is that Clinton's loss derived not from specific decisions she made but rather from the preponderance of the many she did not make," Green wrote. "Her hesitancy and habit of avoiding hard choices exacted a price that eventually sank her chances at the presidency."

The documents also suggest that Clinton's staff remained divided throughout the campaign on whether she should run a positive campaign or attack Obama and her other rivals for the Democratic nomination as being untrustworthy and underqualified, Green wrote.

"Clinton's top advisers never agreed on the answer. Over the course of the campaign, they split into competing factions that drifted in and out of Clinton's favor but always seemed to work at cross purposes. And Clinton herself could never quite decide who was right," he wrote.