WASHINGTON (CNN) -- John Edwards, who made his marriage a central part of his overall message during the 2008 Democratic primaries -- was dealt a political blow Friday after admitting to having an extramarital affair. 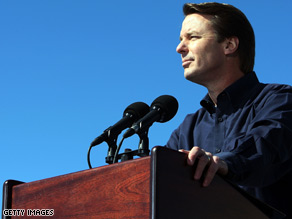 Former Sen. John Edwards has been listed as a possible 2008 vice presidential candidate.

In an interview on ABC News "Nightline," Edwards acknowledged the affair with 42-year-old Rielle Hunter, which began after she was hired to make documentary videos for his campaign, ABC said.

Opinions, however, are mixed on whether he would have a future in politics.

CNN contributor James Carville, a former aide to Bill Clinton -- who acknowledged an extramarital affair with Monica Lewinsky in his second term -- said Edwards' career is in dire straits.

"Certainly, his political career is in shambles. It's not going to come back. I humanly feel sorry for Mrs. Edwards. I feel sorry for the Edwards children. But I'm not shocked," he said Friday.

Elizabeth Edwards, in a posting on the Daily Kos Web site, said, "The fact that it is a mistake that many others have made before him did not make it any easier for me to hear when he told me what he had done.

"But he did tell me. And we began a long and painful process in 2006, a process oddly made somewhat easier with my [cancer] diagnosis in March of 2007. This was our private matter, and I frankly wanted it to be private, because as painful as it was, I did not want to have to play it out on a public stage as well."

"Obviously, lying like this, brazenly, is going to put an end, probably, to his political career and could affect whether he gets any role if Barack Obama were to win the presidency," she said Friday.

The former North Carolina senator, who was often mentioned as a possible candidate for Obama's vice presidential pick, does not believe that his admission will have a long-lasting impact on his career.

Edwards, the vice presidential candidate during Sen. John Kerry's 2004 presidential bid, told ABC on Friday that he never expected to be chosen as Obama's running mate but that his public career has not ended. He said he would not worry about any possible positions in an Obama administration.

Watch more on the Edwards controversy »

"I don't know what's possible and what's gone," he said.

Don Fowler, a former Democratic Party chairman, said this week that Edwards might be forfeiting a major role at the party's upcoming convention in Denver -- or in a future Democratic administration -- unless he cleared the air.

"I think the longer these allegations go unanswered and unresponded to, the more difficult it is for the people producing the convention to give him a prominent spot," Fowler said. iReport: What's your reaction to Edwards' affair?

Obama, in Hawaii for a weeklong vacation, said he understands that Edwards does not plan to attend the convention.

"This is a difficult and painful time for them, and I think they need to work through that process of healing," he said. "My sense is that that's going to be their top priority."

CNN senior political analyst David Gergen, who served as a White House adviser to Presidents Nixon, Ford, Reagan and Clinton, said Democrats could have been hurt if Edwards had clinched the Democratic nomination.

"He put the Democratic Party in real jeopardy," he said. "If he had been the nominee of the party now, and this thing had blown up ... it would have -- it would have ruined the Democrats' chances of taking back the White House."

Edwards announced in January that he was dropping out of the 2008 Democratic presidential race. He endorsed Obama in early May.

He trailed Sen. Hillary Clinton and Obama in the early contests. He came in third in key races in New Hampshire and South Carolina.

Gergen added that the Democratic Party needs to "move swiftly" to resolve this political firestorm so it doesn't linger with voters this fall.

Speaking in support of Obama in Las Vegas, Nevada, on Friday, Clinton responded briefly to a reporter's question about what impact the revelation of the affair would have on Democrats.

"My thoughts and prayer are with the Edwards family today," she said. "That's all I have to say."

"The questions are going to be asked, does this hurt Republicans or Democrats, or the political impact. And the truth is that it's going to hurt everybody, because right now, in an uncertain world, we're looking to see who we can trust to lead the country, and this lessens, I think, faith in political leadership in general," he said Friday.

Democratic strategist and CNN contributor Paul Begala said Edwards' affair will result in a "larger loss of faith in institutions."

"But keep in mind, you know, John Edwards did not order that anyone be tortured. He did not violate the Geneva Convention. He did not forge a document to lead us into a war. He cheated on his wife," he said.

Begala added that although this is a shortcoming for the former senator and a personal tragedy for him and his family, he holds no public office.