(CNN) -- The September issue of Essence magazine features an interview with Sen. Barack Obama and his family inside their Chicago home. 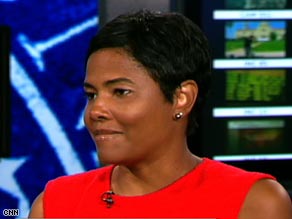 Essence editor-in-chief Angela Burt-Murray said it took a year for the magazine to gain access to the Obama's Illinois home for an intimate interview with the presumptive Democratic presidential nominee, his wife, Michelle, and their daughters, Sasha and Malia.

Chetry: You are the first African-American media outlet to get this inside look. Did your team get a chance to see the real Obamas?

Burt-Murray: I think we did. We went to their home on the South Side of Chicago and it was wonderful to see them as a family interacting with each other, and see the girls skipping around the house, just acting like it's a normal, everyday occurrence to have a camera crew in their home and Secret Service at different points throughout the house and around the yard. But it didn't really seem to impact the girls in any way.

Watch what Essence found inside the Obamas' home »

Chetry: Much was made of an earlier televised interview they with their daughters and they said, looking back, they probably shouldn't have done that. There is so much interest about their family, and yet they want to protect their girls. How do they balance that?

Burt-Murray: They try to take a look at who is around the family and make sure they try to keep things as structured as possible.

But also, you have instances where magazines like Essence show up to take photographs, but the girls are very relaxed because they're in their home environment. And I think that's the difference between our photo shoot and what you saw on television. Taking the girls outside of their home and putting them in the spotlight is probably a bit more challenging for them as parents.

Chetry: They have to deal with completing stereotypes, if you will: They were parodied as these angry black radicals and as these Ivy League elitists. In the magazine, Gwen Ifill wrote, "The Obamas pride themselves on creating a family picture that is authentically black with shades of Norman Rockwell." Explain that. How are they getting that image out.

Burt-Murray: I think it's the idea that they're just an average American family. They have strong family values, they're deeply rooted in their community and they want to show their girls a great example of achievement. But they also want to be a model for the rest of their community.

The Obamas talk about in our story how important it is for them to continue to live in their South Side Chicago neighborhood because it's a neighborhood in transition. So you have children who have the opportunity to see an African-American man run for the highest office in the nation right in their neighborhood. So they're modeling not only for their children but also for the larger community.

Chetry: They do live in a gated community, a $1.6 million home, so it's out of reach for a lot of people.

Burt-Murray: But it's so accessible. While we were there photographing them for Essence, you could see the cars going by and stopping and people getting out to take photographs. The girls were on the porch and people could see them. There is some normalcy there, but it's also obviously something very special and different.

Chetry: They said race had been prominent on the campaign trail. Barack Obama told Gwen Ifill that he thinks race is a national obsession. He thinks the racial divide is not as big an issue in this country as it's made out to be.

Burt-Murray: As evidenced by the success that he's had with his campaign, you can certainly see that attitudes are shifting. But there are still challenges, obviously, that need to be addressed. And it keeps coming up throughout the campaign. So it will be interesting to see what happens when the country goes to the polls in November.