WASHINGTON (CNN) -- Conservative columnist and former CNN host Robert Novak said Monday that he will retire immediately to focus on treatment of a malignant brain tumor. 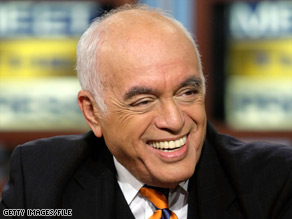 Journalist Robert Novak said he will retire to focus on treatment for a brain tumor.

The longtime Chicago Sun-Times commentator told the newspaper that his prognosis is "dire."

"The details are being worked out with the doctors this week, but the tentative plan is for radiation and chemotherapy," he said.

Novak hit a pedestrian with his car in Washington on July 23 and was cited for failing to yield right of way.

He said he did not see the man crossing the road and continued driving until he was stopped by a cyclist who saw the incident.

The pedestrian was treated for shoulder injuries.

Novak's tumor was diagnosed last week at Brigham and Women's Hospital in Boston after he became ill while on a family trip to Cape Cod, Massachusetts.

After the initial diagnosis, but before a biopsy revealed the tumor was malignant, Novak said he was suspending his "journalistic work for an indefinite but, God willing, not too lengthy period."

Novak's widely syndicated "Inside Report" began in 1963 at the New York Herald-Tribune. The column was co-written by Novak and longtime collaborator Rowland Evans until Evans' retirement in 1993.

"Inside Report" appeared four times a week in the Herald-Tribune and other publications of the Publishers Newspaper Syndicate for three years until the paper folded and the Sun-Times became its home newspaper.

The two also launched "The Evans-Novak Political Report," a twice-monthly newsletter that Novak continued after Evans' death in 2001.

Novak, 77, was also a regular commentator on CNN for 25 years, beginning when the station launched in 1980. He and Evans hosted "Evans and Novak" (later "Evans, Novak, Hunt and Shields"), and Novak was a regular commentator on several other CNN political offerings, including "The Capital Gang" and "Inside Politics." He was host of CNN's "Crossfire" during much of its 25-year run.

Novak was at the center of the scandal over the outing of CIA agent Valerie Plame Wilson in 2003, ultimately leading to the resignation of Vice President Dick Cheney's chief of staff, I. Lewis "Scooter" Libby. Novak published a column revealing her CIA status days after her husband debunked a key Bush administration justification for the invasion of Iraq.

Intentionally revealing the identity of an undercover CIA agent can be a crime.

No one was prosecuted for the leak itself -- which turned out to have come from former Deputy Secretary of State Richard Armitage. Libby was convicted of obstructing an investigation into the leak.

Novak cooperated with special prosecutor Patrick Fitzgerald and was not charged.

All About Robert Novak • Valerie Plame