(CNN) -- John Avlon is a self-proclaimed independent political analyst and the author of the book "Independent Nation." 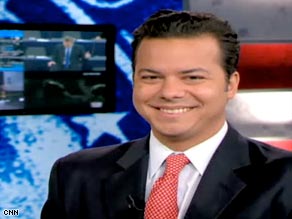 Avlon says the increasingly negative back-and-forth between Sen. John McCain, the presumptive Republican presidential nominee, and his Democratic opponent, Sen. Barack Obama, could alienate independent voters, who make up more than a third of the voting public.

Avlon talked with co-anchor Kiran Chetry on Friday on CNN's American Morning. Below is an edited version of their conversation.

Q: How does the negative campaigning play with independent voters?

Avlon: Independent voters are very sensitive to when politics takes a negative turn. And you know it's August, and the heat's turning up on the campaign trail, and so is the rhetoric.

But candidates need to be very careful, because hypocrisy is the unforgivable sin in politics. Both John McCain and Barack Obama have campaigned as being a break from the politics of personal destruction we've seen in the past. So, whenever the campaign takes a negative turn, independent voters notice, and they'll punish the candidate that takes it too far.

And both candidates so far have been pretty attuned to that. But this is going to be the real test.

Q: According to a study of political commercials by the University of Wisconsin, a third of McCain's television ads have actually been negative attacks on Barack Obama. The study also found that 90 percent of Barack Obama's television ads don't even mention McCain. Is this a risky strategy for John McCain?

Avlon: Isn't that interesting? Yes. You know, John McCain is walking a fine line here because a lot of his credibility with independents comes from the fact that he's always stayed above partisan gutter-ball politics. He's always criticized those folks who've indulged in that, especially on the Republican side, in the past.

So, while [McCain] needs to play offense and define Barack Obama ... Barack Obama is focused really on a larger target, the American people.

Q: When you talk about where independent voters stand on Iraq, are they hard and fast about their views about Iraq, or are those also the facts-on-the-ground type of debates?

Avlon: Sure. Over 60 percent of independent voters say that stabilization in Iraq is more important than an immediate timetable for withdrawal. And Democrats are in danger of being stuck in 2006 on this issue. One of the large critiques they had on the Bush administration, which is valid, is they're not changing their strategy to meet changing facts on the ground.

Well, the reality is the surge has worked. The facts on the ground have changed. And I think Democrats need to decide what's more important -- stabilization or withdrawal. That's a major test of leadership for Barack Obama.