Analysis: Will voters punish Congress for coming up empty?

WASHINGTON (CNN) -- Congress adjourned Friday for a five-week summer recess with little-to-nothing to show on lowering high energy prices for consumers. This comes despite a vow by legislators following its last long break to deliver some relief to outraged constituents. 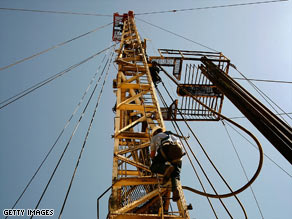 Partisan divisions over drilling has stalled energy legislation in Congress.

"It is the responsibility of the people to vote the Congress out of office for good. We need action not talk," writes CNN iReporter Alan Robinson Jr., a computer programmer in San Diego, California. "We are giving our wealth to the Middle East, because we refuse to provide our own energy. Why? Because our Congress represents the corporate state and not the people."

CNN iReporter BethesdaBK writes "In fact, every new promise that the new members of Congress ran on to get elected remains exactly that, an empty promise. I have to laugh when I recall the self-righteous finger waving of [House Speaker Nancy] Pelosi and company. Now go on and enjoy your vacation, you earned it."

Peter Fenn, a lecturer at the University of South Carolina and CNN contributor, says that while there may be some voter anger over Congress's lack of action, "we have all been wringing our hands about energy and our dependence on foreign oil for the past 30 years."

"And we wonder why the public is cynical and the 'wrong track' numbers are at an all time high," he said, suggesting the number can't dip much lower. "Voters have already made up their minds about Congress."

Watch why Congress is in gridlock over energy »

Indeed, a CNN/Opinion Research Corp. poll released Thursday found that more than three-quarters of the country, 76 percent, feel things are going badly in the country. That same poll indicated 22 percent approve of how Congress is handling its job, and 77 percent disapprove. Democratic leaders in Congress fared slightly better with 36 percent saying Democrats are handling their job well.

Partisan wrangling is to blame for the lack of progress.

Among the sticking points: a proposal to lift a 1981 ban on offshore oil drilling and open the Arctic National Wildlife Reserve in Alaska for exploration. Republicans argued it would increase domestic oil production and lower prices. Democratic leaders blocked such a vote arguing such an approach could hurt the environment as well as delay a transition to carbon-free, renewable energy sources such as solar and wind energy. Democrats also argue plenty of existing offshore areas are already available to oil companies.

Some voters and Congressional observers suggest that both parties stand to benefit politically from delaying any action on energy.

"[Members of Congress] (and in this example I mean the majority) have refused to take any action because it is easier to wait out the presidential election and then see what the climate is like because, unfortunately for the people, Congress can choose to vote only when it is convenient to do so," writes iReport contributor Michael Turner, a high school Physics teacher from Bloomington, Illinois.

Thomas Mann, a senior fellow at the Brookings Institution in Washington, says the parties are crafting strategies to curry favor with the public to gain a political advantage. Mann says neither party is willing to budge from their positions, despite having to face the voters in a little over three months, "because there is nothing they can do for immediate energy prices, and they have profound differences for the long term that are not easily reconcilable."

Republicans will try to make congressional inaction on energy legislation a campaign issue against the Democrats, Mann said, but will find it difficult to make headway with voters due to the GOP's unpopularity.

"Right now the public's anger at Washington is mainly being taken out on the party of the president," Mann said, "and it's not likely that is going in change due to Congress's failure to act during the August recess."

Democrats angling for more Congressional control come election argue this a smokescreen -- that pushing energy prices down is by no means contingent on offshore drilling.

"Allowing offshore drilling will have no impact on gas prices... it's a drop in the bucket," Mann said. "[But] the idea that this is a conspiracy by the big oil companies is wrong as well."

All About Energy Policy • Oil Production and Refining • U.S. Congress