WASHINGTON (CNN) -- A senior U.S. lawmaker says China is ordering foreign-owned hotels there to install government software and hardware that would let authorities spy on guests' Internet activities during the Beijing Olympics. 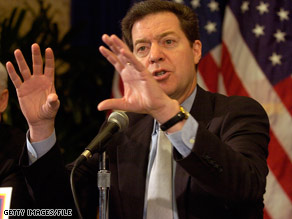 Sen. Sam Brownback says tourists could be subjected to Internet spying during the Olympics.

CNN was not able to independently verify the original document, and calls to the Chinese Embassy in Washington went unanswered. CNN will continue to try to reach Beijing for a response to Brownback's allegations.

The senator said journalists, athletes, tourists, activists and others would be subjected to invasive intelligence gathering by the Public Security Bureau.

Several international hotel chains have confirmed the order, Brownback said, but he wouldn't disclose which ones, saying they fear retaliation from the Chinese government. He said the hotels are warning guests that their Internet activities are not private.

The translated document offered by Brownback's staff states that "refusing the installment or stopping operation of the system after installment will be subject to punishment. ... In case of serious violation, access to the Internet will be suspended or the business license will be canceled."

CNN reached one hotel manager who said authorities met with the staff to discuss Internet security. However, he said, the officials didn't provide any documentation.

The manager said on condition of anonymity that the Chinese government is capable of monitoring Internet traffic without involving or telling the hotels that it is doing so.

"They are required by the U.S. government not to permit unauthorized access to information stored in their computers," he said, "and if the Chinese say, 'We're going to get access to what's in your computer if you use your computer in China,' that's a real problem."

All About China • Summer Olympics • Espionage and Intelligence