WASHINGTON (CNN) -- Aides to then-Attorney General Alberto Gonzales improperly considered political affiliations and ideologies in hiring, but Gonzales was unaware of those actions, according to results of an investigation released Monday by the Justice Department internal watchdog. 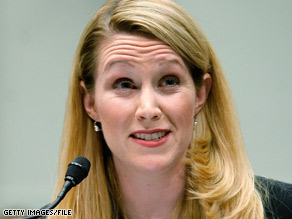 The report cited White House liaison Monica Goodling as the key operative behind many of the political moves.

The report provides no indication criminal laws were violated but cites illegal civil actions involving discrimination in hiring. Investigators, however, said no penalties are likely because the aides no longer work for the Justice Department.

Monica Goodling, the White House liaison for the attorney general, was the key operative behind many of the politicized decisions involving career prosecutors and immigration judges, the report says.

Investigators found Gonzales was oblivious to what Goodling was doing.

"When we interviewed him, Gonzales stated that he was not aware at the time that Goodling used political factors in assessing candidates for career positions ... and was not even aware that Goodling's portfolio in the Office of Attorney General included the hiring of immigration judges," the report said.

Gonzales' attorney, George Terwilliger, issued a statement defending Gonzales' lack of knowledge about the actions of his top aides.

"It's simply not possible for any Cabinet officer to be completely aware of and micromanage the activities of staffers, particularly where they don't inform him of what's going on," Terwilliger said.

In a brief statement, Gonzales said, "Political considerations should play no part in the hiring of career officials at the Department of Justice."

Goodling, who resigned from the Justice Department last year, may have jeopardized her ability to practice law. An official close to the investigation says state bar associations have inquired about Goodling's actions, and could choose to take away her law license.

The report says in one case Goodling discriminated against a female assistant U.S. attorney on the basis of her sexual orientation.

Goodling's attorney, John Dowd, had no comment on the report.

The 140-page report represents the culmination of a yearlong investigation by the department's inspector general and the Office of Public Responsibility, which monitors the conduct of Justice Department attorneys.

Gonzales was among 85 individuals interviewed by investigators, but Goodling refused to be interviewed.

Goodling's only public comments were made in May 2007 before a House Committee, which granted her immunity from potential prosecution. In her testimony, Goodling admitted that some of her decisions "may have been influenced in part based on political considerations."

Kyle Sampson, former chief of staff to Gonzales, also came in for criticism for considering politics in hiring, as did Goodling's predecessors, Susan Richmond and Jan Williams, who served as White House liaison.

"With respect to (selection of) immigration judges, he believed in complete good faith that they were not career civil service positions and that political criteria could be taken into account," Berenson said. When Sampson later learned he was incorrect, he supported correcting the process, he said.

Former top White House official Karl Rove received only a passing mention in the report. Sampson noted Rove was a "supporter" of a particular candidate who applied for a position as an immigration judge.

The only individual cited for misconduct who remains with the Justice Department is John Nowacki, who told superiors Goodling had not used political affiliation to select candidates when he knew that she had done so. Nowacki, who is currently detailed to Iraq, could be subject to disciplinary action.

Attorney General Michael Mukasey, who replaced Gonzales, promptly issued a statement saying he was "disturbed" by the findings, and vowed to ensure that "the conduct described in this report does not occur again at the department."

"It is crucial that the American people have confidence in the propriety of what we do and how we do it, and I will continue my efforts to make certain they can have such confidence," Mukasey said.

"It is now clear that these politically rooted actions were widespread and could not have been done without at least the tacit approval of senior department officials," said Senate Judiciary Committee Chairman Patrick Leahy, D-Vermont.

"The report also indicates that Monica Goodling, Kyle Sampson, and Alberto Gonzales may have lied to the Congress about these matters. I have directed my staff to closely review this matter and to consider whether a criminal referral for perjury is needed," Conyers said.

Lawyers for Goodling on Monday issued a statement rejecting Conyers' assertion that she may have lied.

"In light of Ms. Goodling's exceptional candor and cooperation, it is outrageous for Chairman Conyers ... to suggest that she 'may have lied to the Congress,' " the lawyers said. The legal team, led by Washington attorney John Dowd, noted Conyers had twice thanked Goodling when she concluded her testimony for "getting us closer to the truth of the serious matters we have been investigating."

The lawyers said Goodling admitted in testimony that she "crossed the line" in considering political factors in hiring.

Gonzales' lawyer, George Terwilliger, similarly challenged Conyers for his suggestion of possible perjury and, in a letter to him, demanded he "retract the suggestion."

The new report indicates its findings represent the second of four installments of the wide-ranging investigation of the politicization of the Justice Department. The two remaining reports, expected later this year, will focus on hiring in the Civil Rights Division and the results of the probe into the firing of several U.S. attorneys.

All About Alberto Gonzales • Monica Goodling • U.S. Department of Justice