WASHINGTON (CNN) -- The Environmental Protection Agency advised employees last month not to answer questions from journalists, the Government Accountability Office or the agency's inspector general, according to an EPA e-mail made public Monday. 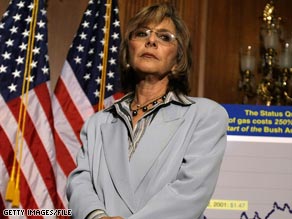 California Sen. Barbara Boxer has said the EPA is becoming a "secretive, dangerous ally of polluters."

"Please do not respond to questions or make any statements," the June 16 e-mail said, advising staff to direct questioners to senior staff members cleared to answer questions from outside the agency.

Robbi Farrell, chief of staff of the EPA's compliance assurance division, sent the e-mail to 11 managers in the department.

The e-mail was posted on a Web site of the Public Employees for Environmental Responsibility. The group, an alliance of state and federal environmental professionals, labeled the communication a "gag order."

"The order reinforces a growing bunker mentality within an EPA that is the subject of a growing number of probes into political interference with agency operations," the group said.

EPA press director Roxanne Smith rejected that characterization, saying the e-mail was about efficiency, not secrecy.

"A senior staffer in the enforcement office sent out an e-mail to simply help her office efficiently respond to requests from the press, GAO and EPA's inspector general," Smith told CNN.

"There is nothing in the procedure that restricts conversation between enforcement staff, the press, GAO and the IG," she said, adding it is "consistent with existing agency polices."

Smith is one of the people to whom recipients of the memo were told to direct journalists' questions.

In a written statement, the EPA's Office of Inspector General said it did not approve the language of Robbi's warning and advised, "All EPA officials and employees are required to cooperate" with the office.

"This cooperation includes providing the OIG full and unrestricted access to EPA documents, records, and personnel," the statement read. "We are currently engaged in discussions with OECA [Office of Enforcement and Compliance Assurance] to assure that OIG and OECA interpretations are consistent in this matter."

And Sen. Barbara Boxer, a California Democrat who has long battled with the agency's administrator, Stephen Johnson, said the instructions showed that Johnson is "turning the EPA into a secretive, dangerous ally of polluters, instead of a leader in the effort to protect the health and safety of the American people."

Last week, Johnson denied a request to appear before two Senate committees to talk about whether the EPA's decisions comply with its staff's legal and technical recommendations.

The committee's chairman, Sen. Patrick Leahy, D-Vermont, has asked the inspector general's office to assess the administration's claims of executive privilege as it tries to keep documents related to EPA decisions from Congress.

Boxer chairs the Senate Committee on the Environment and Public Works.

She is expected to hold a news conference Tuesday to talk about what she calls "political interference in recent EPA decisions" and discuss "apparent contradictions between the sworn testimony" of Johnson and accounts given by other sworn witnesses.