(CNN) -- Barack Obama touched hearts during an impassioned speech to a 200,000-strong crowd in Berlin, German newspapers agreed, but suspicions remain about the White House contender's motives for courting a European audience. 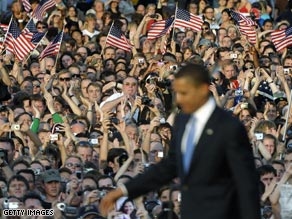 Barack Obama addressed a huge and friendly crowd in Berlin on Thursday.

Berlin's Der Tagesspiegel wondered whether so many young people had ever gathered for a political event in Germany and said that Obama's address -- which echoed speeches by former U.S. presidents John F. Kennedy and Ronald Reagan when the divided city was in the Cold War frontline -- could only have been made in the German capital.

"Barack Obama's address might not have been statesmanlike and it definitely wasn't worldly-wise. But with its symbolism and the message of this 46-year-old, it certainly was the signal of a new era for a new generation on both sides of the Atlantic," the newspaper said.

"What better thing could have happened to us than the potential next president of the U.S. sending this message to the world from here?"

Obama moved on from Germany to France on Friday where he was due to hold talks with President Nicolas Sarkozy. He is also slated to meet British Prime Minister Gordon Brown and opposition leader David Cameron in London later Friday.

German tabloid Bild said Obama had articulated his version of the American dream -- the idea that politics can change the world: "Unlike George W. Bush, he wants to do this in cooperation with others, especially Europe. That's his message from Berlin: Let's try this together!"

But Bild warned that an Obama presidency would place fresh demands on traditional allies such as Germany, which fell out with Washington over the war in Iraq and has refused to contribute combat troops to NATO operations in Afghanistan. iReport.com: View photos from the scene

Munich's Sueddeutsche Zeitung sounded a more cautious note, warning that an Obama presidency would be "expensive for Germany."

"He explicitly called for German soldiers for Afghanistan -- he did not say 'more soldiers' but that was what he meant," said commentator Reymer Kluever. "And Obama also indicated this: he will want support as president to wind up the Iraq adventure."

The paper noted too that the speech had been intended less for the crowds gathered in Berlin's Tiergarten park than for "hesitant white voters in Ohio and Pennsylvania, Colorado and Virginia" and said that Obama had proved himself to be a clever tactician, capable of shifting positions to suit his audience.

"He wants to convince (voters) that the world will also listen to a black president... And there's one other thing one shouldn't forget when talking about Obama: He easily reworks even positions that have been written in stone and adjusts to new requirements."

But nobody in the German press appears to have been quite as smitten by their visitor as Bild reporter Judith Bonesky, who had the opportunity to work out with Obama in the gym of the Ritz Carlton Hotel earlier in the day.

"Obama (with toned arms and a strong back) puts on his headphones for his iPod to listen to pop music. He hums quietly. Then he jumps on a fitness bike. He pushes three times on the pedals -- but then can't be bothered with it.

"He picks up a pair of 16 kilo weights and starts curling them with his left and right arms, 30 repetitions on each side. Then, amazingly, he picks up the 32 kilo weights! Very slowly he lifts them, first 10 curls with his right, then 10 with his left.

Quickly I ask: "Mr. Obama, could I take a photo?". "Of course!" he answers, before asking my name and coming over to stand next to me. "My name's Judith" I reply. "I'm Barack Obama, nice to meet you!" he says, and puts his arm across my shoulder. I put my arm around his hip -- wow, he didn't even sweat! WHAT A MAN!"