(CNN) -- From cyberspace to college campuses, many young conservatives are worried that Sen. John McCain is not appealing to their generation. 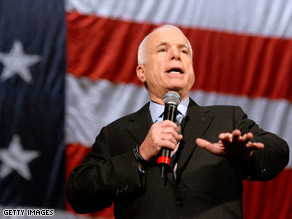 At a town hall meeting in Ohio this month, a student told McCain that Republicans were a dying breed on his campus.

"I understand the challenge I have, and I understand that this election is really all about the people of your generation," McCain said.

Many young Republicans said Sen. Barack Obama, the 46-year-old junior senator from Illinois, is inspiring voters their age, but McCain, the 71-year-old Arizona senator who has been in office since the early '80s, is not.

Eric Perlmutter, a Republican and student at the at the University of Southern California, said the roaring enthusiasm that follows Obama is missing among conservatives his age.

"We try to get people out to our college Republican meetings, but ... we can't seem to draw the same kind of vocal support," he said.

At the July town hall meeting in Portsmouth, Ohio, McCain said he knows that he has "a lot of work to do" with the younger voters.

The senator said he needs young conservatives to help spread his message for him, because "there's nothing that convinces young people like other young people."

McCain also acknowledged the importance of using the Internet to reach out to a generation that stays in touch via social networking sites.

Perlmutter said he cringed when McCain admitted he doesn't use e-mail. Obama, however, is frequently seen with Blackberry in hand.

Additionally, Perlmutter pointed out that the images used in McCain's campaign -- such as a message about small businesses showing a barber shop with a traditional red and blue pole -- hardly connect to the younger generation.

"Well, when you see the Main Street barber shop image, you think of 1950s America. An entrepreneur, a Silicon Valley guy would definitely make him more attractive," he said.

Obama also has increased his college-age appeal by holding rallies and giving speeches at hundreds of campuses.

McCain has said he recognizes that he needs to get out to those venues "where young people are engaged and receiving their information and forming their opinions."

"Sen. McCain should demand that these same colleges and universities host him or else their tax-exempt status could be in jeopardy," said Jason Mattera, spokesman for Young America's Foundation, a conservative outreach group.

According to a Pew Research Center study conducted between October and March, McCain has a big numbers gap to close.

The study found that the current generation of young voters, those who came of age during the President Bush years, are giving the Democrats a wide edge.

The McCain campaign said it plans to increase the senator's presence on sites such as Facebook and MySpace in addition to the candidate making appearance on shows that appeal to younger viewers, such as "The Daily Show with Jon Stewart," "The Tonight Show with Jay Leno" and the "Late Show with David Letterman."

In past elections, both parties have tended to put less focus on younger voters because historically, their turnout has been low.

With fewer than four months until the November election, McCain said he's confident he can convince young voters that he is the candidate for them.

"I believe that I can convince them that I have the plan of action and the ideals and the goals and the inspiration that, as next president of the United States, I can serve better their interests than my opponent," he said.