WASHINGTON (CNN) -- The United States needs to formulate an "updated strategy" for Iraq, now that the Bush administration's 18-month game plan for the country is completed, the head of the Government Accountability Office told lawmakers Wednesday. 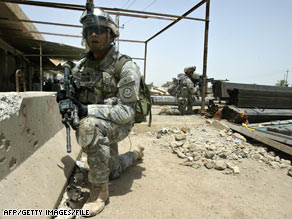 U.S. soldiers crouch at their positions during a mission in Baquba, northeast of Baghdad, earlier this month.

The report, Dodaro said in prepared remarks, noted that "some gains" have been made in the security, legislative and economic areas since President Bush last year announced "The New Way Forward" -- the near-term goals for Iraq that included the military surge. The surge, or troop escalation, ended this month.

"The United States had made some progress in achieving key goals stated in 'The New Way Forward,' " the report said. "Looking forward, many challenges remain, and an updated strategy is essential."

Dodaro said the progress report recommended an updated strategy in Iraq to the Departments of State and Defense. He told lawmakers that the departments said they will "review and refine the current strategy as necessary, but asserted that 'The New Way Forward' remains valid."

Dodaro also argued that a renewed strategy is important "for several reasons." The goals and objectives for the present phase end this month and they are "contained in disparate documents rather than a single strategic plan," he said in his prepared remarks.

"Much has changed in Iraq since January 2007, when the president announced 'The New Way Forward.' Violence is down, U.S. surge forces are leaving, and a new framework for the U.S. presence in Iraq needs to be agreed upon beyond the U.N. mandate," Dodaro said.

The GAO report said that while the number of enemy-initiated attacks in Iraq have decreased about 80 percent from June 2007 to June 2008, the "security environment remains volatile and dangerous." The agency noted that not all of the country's provinces have lead responsibility for security and less than 10 percent of Iraqi security forces "were at the highest readiness level."

The progress report also cited the enactment by Iraqi lawmakers of measures "to return some Baathists to government, grant amnesty to detained Iraqis and define provincial powers." It said there is an "unfinished" legislative agenda, citing the need for measures on "sharing oil revenues, disarming militias, and holding provincial elections."

A provincial election law was passed on Tuesday by Iraq's parliament, the Council of Representatives, but Iraqi President Jalal Talabani has rejected it, his office said Wednesday.

The measure was strongly opposed by Kurdish lawmakers and Iraq's Kurdish Regional Government had criticized it, calling for its rejection. It's not clear whether further negotiations may take place to amend the legislation.

As for the economic arena, crude oil production is below U.S. goals, even though it has "improved for short periods," the GAO report said. Goals for water service are "close to being reached," but the daily electricity supply "met only slightly more than half of demand in early July 2008."

It also noted that Iraq "spent only 24 percent of the $27 billion it budgeted for its reconstruction efforts between 2005 and 2007."

Dodaro said the Pentagon, State Department and other agencies should "develop an updated strategy for Iraq that defines U.S. goals and objectives after July 2008."

"This strategy should build on recent security and legislative gains, address the remaining unmet goals and challenges for the near and long term, clearly articulate goals, objectives, roles and responsibilities, and the resources needed," he said.

All About Iraq • GAO