(CNN) -- Democratic Sen. Barack Obama and Republican Sen. John McCain in August will be on the same stage for the first time in the 2008 presidential campaign. 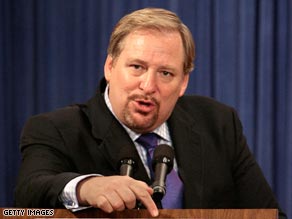 The Rev. Rick Warren says he makes no endorsements because he shepherds "both sides of the flock."

The Rev. Rick Warren has invited them to appear at a leadership and compassion forum in his Saddleback Church in Lake Forest, California, on August 16. Warren, the author of the best-selling book "The Purpose Driven Life" spoke with CNN's Wolf Blitzer by phone Tuesday from Sao Paulo, Brazil.

BLITZER: Pastor Warren, how did you do it? How did you convince both of them to show up?

PASTOR RICK WARREN, SADDLEBACK CHURCH: Well, Wolf, they've both been friends for a long time. I knew both John and Barack before either of them decided to run for office, had talked with them. Both of them have helped me in the past with our peace plan and with -- they've sent messages to Saddleback at some of our conferences.

And so I just thought let's -- you know, I might be the guy to get them together. So, I called them up and said, let's do it. And they said, well, we'll do it if you be the only questioner, if you don't have a forum, don't have a panel. And if you'll ask all the questions, then we'll do it.

WARREN: Yes. I'm going to -- my plan is to bring them out on stage together at the beginning or at the end. But what I want to do is I want to let each of them talk without interrupting each other. And it's not a debate format.

There will be plenty of time for debates. What I want to do is get people to know the real person like I know them without a time barrier and a buzzer and a time for rebuttal. Let them just speak what they need to say.

BLITZER: The last time we spoke was right after you invited Barack Obama when he was still running for the Democratic presidential nomination. You got some criticism from a few fellow evangelicals out there. You called him in the interview with me an amazing, an amazing man, Barack Obama. Could you see yourself supporting him for president?

WARREN: Well, I don't support anybody for president publicly. I never endorse. I never campaign.

So, I think they're both amazing men. I've known them for a long time. They're both very, very different.