(CNN) -- Democratic presidential candidate Barack Obama is in Afghanistan on a multistop overseas trip for meetings with international leaders but with an eye on the U.S. presidential race back home. 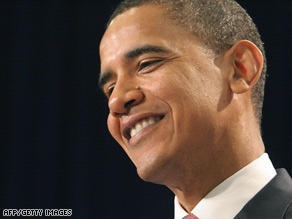 Sen. Barack Obama is expected to visit several world leaders over the next few weeks.

Obama's trip, which includes visits to Iraq, Jordan, Israel, Germany, France and the United Kingdom, is intended to bolster his foreign policy credentials before U.S. voters.

"This is the campaign trail via satellite -- pictures for the rhetoric back home," CNN's Candy Crowley said, adding that the trip was intended to demonstrate that Obama was up to the job of taking a lead role on the international stage.

"The question is, is he tough enough to stand up for America but graceful enough to improve [its] image?" Crowley said.

Watch what Obama needs from this trip »

In a recent Washington Post/ABC News poll, 48 percent of registered voters said Obama would make a good commander in chief, compared with 72 percent for his Republican rival, John McCain.

Sen. Barack Obama is stepping onto the world's stage. During his trip to Asia, the Middle East and Europe, Obama will visit, in order:

Obama is now in Afghanistan and plans to visit Iraq.

"The message to voters back home is that he is focused on being a strong and effective commander in chief who is going to rehabilitate our image across the world," Democratic Sen. Evan Bayh said.

But a spokeswoman for McCain said Thursday that Obama's trip was politically motivated.

"It's about politics. It's a way for Obama to try and compete on foreign policy," Jill Hazelbaker said.

McCain has visited both countries and accuses his rival of naivete for suggesting that Iraq had distracted the United States from the growing conflict in Afghanistan.

Watch how the candidates are battling over Iraq »

A video released by the McCain campaign also accused Obama of "flip-flopping" over his plans to withdraw troops from Iraq. The campaign also aired its first negative advertisement of the season, hitting Obama on foreign policy issues.

A diplomatic source told Time magazine that King Abdullah II of Jordan would urge Obama, if elected, to make Arab-Israeli peace talks a higher priority than has been the case under President Bush.

Obama can expect a friendly reception in Europe, where he will meet Thursday with German Chancellor Angela Merkel.

CNN European political editor Robin Oakley said Obama's campaign has captured the public imagination there -- though he will be keen to avoid the sort of suggestions that he is "too European" that dogged 2004 Democratic presidential nominee John Kerry.

"I was talking to a former British foreign secretary this week, and he said, 'It's like JFK [John F. Kennedy].' He said it may not be justified, it may not be sensible, but that is the feeling," Oakley said.

But the trip would also offer a more critical opportunity to gauge Obama's suitability for statesmanship, Oakley said: "People have been saying to me, 'Look, this guy has only been in national politics for three years, let alone international politics.' We don't really know exactly what he is going to do."