(CNN) -- Sens. Barack Obama and Hillary Clinton teamed up again Wednesday, but not all Clinton's supporters are jumping on the Obama bandwagon despite her calls for unity. 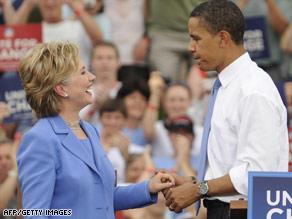 Two fundraisers on Wednesday in New York and a third on Thursday, make it five times the two have appeared together since Clinton ended her quest for the Democratic presidential nomination last month.

Two of the events are aimed at raising money for Obama's campaign, and one is to help Clinton retire the debt from her failed run.

The joint appearances have been choreographed carefully to produce pictures of the former rivals standing side by side in an effort to help move beyond the bitterness of the hard-fought Democratic primary.

But for some of Clinton's top supporters, it's going to take more than just encouragement from the former first lady to get them to open their wallets and hearts to Obama.

Some of Clinton's fundraisers are pressuring the Obama campaign to support her policy positions -- and help pay off her campaign debt.

Clinton was more than $22 million in the red when she bowed out last month, and half of it was personal loans she made to the campaign to keep it running.

With that debt yet to be paid off, some of Clinton's supporters are balking at the idea of forking over donations for Obama -- especially if he does not choose her to be his running mate.

"We are being asked to embrace party unity without the fair representation of Hillary Clinton and her 18 million voters," she says on her Web site. "Party unity requires bilateral action. We ask Barack Obama and the [Democratic National Committee] to respond."

De Rothschild is one of the so-called "Hillraisers" -- supporters who raised at least $100,000 for Clinton. She's yet to fork over any cash for Obama, and she doesn't know if she will.

"I certainly know there are lots of people who are withholding their money," she said.

That sentiment may be sending some Clinton fans into Sen. John McCain's court.

The Obama campaign said it expects the "Hillraisers" to come around, but in the meantime, the presumptive GOP nominee is appealing to Clinton fans and trying to make inroads where he can.

CNN's Alexander Mooney and Chris Welch contributed to this report.