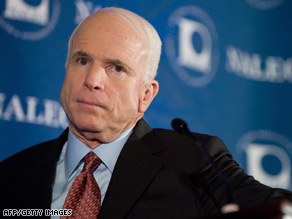 "You know, this election is about trust, and trusting people's word, and unfortunately apparently on several items, Sen. Obama's word cannot be trusted," McCain said in Louisville, Kentucky.

The comment came as McCain criticized Obama for reversing positions on public financing and other issues.

McCain said, "I take difficult positions sometimes. Mitch will tell you, I'm not elected Ms. Congeniality every year in the United States Senate. But the fact is that I'll keep my word to the American people, and you can trust me."

McCain's charges followed speeches from both candidates at the annual conference of NALEO, the National Association of Latino Elected and Appointed Officials.

At the conference, Obama accused McCain of backing down on immigration reform for political reasons.

"One place where Sen. McCain used to offer change was on immigration. He was a champion of comprehensive reform, and I admired him for it. But when he was running for his party's nomination, he walked away from that commitment and he's said he wouldn't even support his own legislation if it came up for a vote. We can't vacillate. We can't shift," Obama said Saturday in Washington.

McCain, who spoke before Obama, also issued a strong challenge to Obama over his call for the Illinois senator to join him in a town hall meeting.

Both candidates were trying to reach out to the Latino voting bloc.

Watch as both McCain and Obama woo Latinos »

Much of McCain's speech focused on the issues he has been pushing throughout the week: energy solutions and the lagging economy.

Obama touched on the importance of the Latino voting bloc.

"This election could well come down to how many Latinos turn out to vote. And I'm proud that my campaign is working hard to register more Latinos and bring them into the political process.

"Because I truly believe that if we work together and fight together and stand together this fall, then you and I together will change the political map from top to bottom," Obama said.

According to the group, Phoenix resident Liz Hourican, holding a camera aimed at the candidate, stood up when McCain said "I represent Arizona ..."

As the still-shouting woman was escorted from the hall, McCain laughed off the disruption and joked, "That's a long trip out."

"I'm sure you've seen the polls out now about trust and confidence in our government, and the one thing the American people want us to stop doing is yelling at each other," he said.

"Your silence is consent to war crimes! War criminal!" one yelled. Another woman carried a pink banner that read "McCain=Guerra," or "McCain=War."

McCain, however, was met with a standing ovation by the audience at the end.

The Arizona senator paid his respects to "the contributions of Hispanic-Americans to the culture, economy and security of the country I have served all my adult life."

"And I know this country, which I love more than almost anything, would be the poorer were we deprived of the patriotism, industry and decency of those millions of Americans whose families came here from Mexico, Central and South America," he said.

He said he believes that immigration reform begins with securing the United States border with Mexico. He touched on his own failed attempt at an immigration bill.

"I and many other colleagues twice attempted to pass comprehensive immigration legislation to fix our broken borders. ... We must prove to [Americans] that we can and will secure our borders first, while respecting the dignity and rights of citizens and legal residents of the United States," he said.

McCain co-sponsored Bush-backed immigration legislation that would have increased funding and border security technology, tightened enforcement of existing laws and provided a legal path to citizenship for some illegal immigrants. He also voted to authorize construction of a 700-mile fence along the U.S.-Mexican border.

The Illinois Democrat also offered his position on immigration. He said reform will depend on securing the borders and punishing employers who exploit immigrant labor.

"[It's] reform that finally brings the 12 million people who are here illegally out of the shadows by requiring them to take steps to become legal citizens putting them on a pathway to citizenship," he added. "I will say it now, and I will say it after I'm president."

CNN's Steve Brusk and Ed Hornick contributed to this report.