PITTSBURGH, Pennsylvania (CNN) -- They're spiritual misfits. Rabble-rousers. They packed the shell of the old Baptist church on Negley Avenue in Pittsburgh, Pennsylvania, to hear author, Christian activist and fellow misfit Shane Claiborne stump on the campaign for a third party candidate, Jesus. 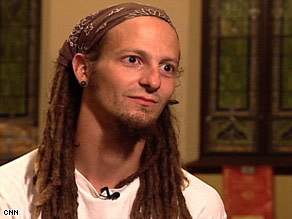 People pack churches to hear Shane Claiborne talk about "Jesus for President," the book he co-authored.

The dreadlocked Christian activist from Philadelphia and his team parked a black school bus around the back. The hand-painted gold letters on the side read "Jesus for President."

The bus runs on vegetable oil and, yes, it's a political statement.

"It'll be a long time before we fight a war over used veggie oil," says Claiborne with a sly smile.

Claiborne is touring the country, packing churches and community centers, in support of the book he and Chris Haw co-authored, "Jesus for President."

"This whole project is about the political imagination of what it means to follow after Jesus," Claiborne said. "The language of Jesus as Lord and savior is just as radical as it would be to say 'Jesus as our commander in chief' today."

Watch a report on young evangelicals by CNN's Kate Bolduan »

Young evangelicals represent an important swing-voting bloc. They're not a lock for Republicans as their parents were. Their feet are firmly planted on issues dear to both parties. Traditional family values are, as they have been in the past, an important issue.

But these voters say views on abortion and homosexuality won't define them in November. The environment and social justice are moving to the forefront of their discussions.

About 26 percent of the United States identifies itself as evangelical Christians in the Protestant tradition, according to the latest U.S. Religious Landscape study by the Pew Forum on Religion and Public Life. In 2004, more than 75 percent of evangelicals cast their vote for George W. Bush.

"They delivered for him in some key states, like Ohio, without which he could not have won," said CNN's Bill Schneider, senior political analyst. "It was the rallying of the evangelical base that Karl Rove developed as a strategy, maximizing turnout among your base voters, not worrying about independents or swing voters."

But polls have shown that evangelicals as a whole, following national trends, are disaffected with Republican leadership and increasingly up for grabs.

Thursday was the fifth night of the tour and it has already seen hundreds show up in Grand Rapids, Michigan, and Indianapolis, Indiana.

It was a hot, muggy June day in Pittsburgh. About 250 people came through the doors to find there was no air conditioning in the old church-turned-community center. They ran out of chairs so people took to the floors and leaned against the walls.

There were voters from across the board: Republicans, Democrats and independents. Most were young, Christian by background, evangelical in theology, and they say they're hungry for something more than partisan politics.

Steph Walker and Amanda Widing had to settle for seats in the back.

"I would say that social justice and issues like that have definitely arisen as an important part of my faith and, because of that, it affects how I vote and think of those things definitely," said 21-year-old Walker.

She grew up in a Republican household but has switched parties and will vote for Sen. Barack Obama in November.

Widing, 20, is a registered Republican but unsure who she'll vote for.

Eric Sapp is a founding member of the Eleison group focused on getting people of faith out to the polls for Democrats. He sees younger evangelicals as prime targets to swing.

"These voters are starting to become independent swing voters instead of a lock for either party," Sapp said. "For Democrats, also, it's a successful place because when a group had been voting four out of five Republican and they start becoming a swing constituency that also has significant electoral implications."

Back on stage Claiborne takes the crowd through a multimedia presentation.

"With the respectability and the power of the church comes the temptation to prostitute our identity for every political agenda."

The speech is fiery at times, pensive at others. It emphasizes caring for the poor and the downtrodden.

He talks about war and the environment. He also talks about how Jesus stood up to the Roman Empire, a message he believes is relevant to the United States now.

"For many of us, Caesar has colonized our imagination, our landscape and our ideology," he says while a picture of Mount Rushmore flashes behind him. On the screen "Vandalism" pops up in black letters.

Trading lines back and forth from a script with Haw, they save the most wrath for Christians who they say have missed the point of the cross.

"We've profaned the blood at the foot of the cross and turned it into Kool-Aid and marketed it all over the world. We'll make an art and a business out of taking the Lord's name in vain," Claiborne says as images of Christ on the cross and the American flag flash behind him.

They endorse no candidate and make no effort to sway the voters for one party or another.

After the speech in an interview with CNN, Claiborne said, "This is not about going left or right, this is about going deeper and trying to understand together. Rather than endorse candidates, we ask them to endorse what is at the heart of Jesus and that is the poor or the peacemakers and when we see that then we'll get behind them."

Claiborne says the movement of younger evangelicals is growing and looking at the Bible in more holistic terms. He is quick to say the call of Christ has more to do with how people live their lives on November 3 and 5 than how they vote on November 4.

"It's certainly easy to walk into a voting booth every four years and feel like you're going to change the world but that's not going to do it."

After the interview, Claiborne, Haw and the band pack up and head to a local restaurant in search of more grease to power the bus. They find it at a Chinese restaurant a few miles away.

At 11 p.m. they're on the road again. They drive through the night to Washington, sleeping in the retrofitted bunks in the back of the school bus.

The next night in the nation's capital they hit the stump again, calling for young evangelicals to vote "Jesus for President."