Crowley: A picture-perfect day in Unity

UNITY, New Hampshire (CNN) -- The day began with a kiss. 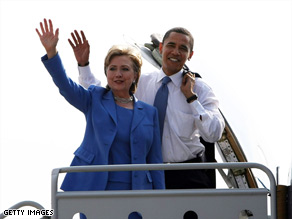 Sen. Barack Obama, on the tarmac at Reagan Washington National Airport, reached out to shake Sen. Hillary Clinton's hand and leaned down to kiss her cheek.

It went on from there. Wearing a tie that matched her suit, he put his hand on her back, guiding the way up the plane steps.

They sat side-by-side for the flight up to Manchester, New Hampshire, chatting amiably. One overheard conversation was about the plane. Clinton had used it during the primary season.

They hopped on a souped-up bus for the 1½-hour ride to Unity, New Hampshire.

The honorary mayor of Unity introduced the pair, admitting that he was a Republican who voted for John McCain in the primary. He didn't seem so sure about the general election.

They walked onstage to the tune of "Beautiful Day."

Arms around each other's waists, they smiled and waved at the crowd.

Every camera angle had UNITY signs, big and little, in the backdrop.

She said she wants to help elect him president. He gave an ode to Hillary: "She rocks."

One woman stood at the back, periodically yelling, "Hillary for VP!"

A few others, older women, stubbornly held up tattered Hillary For President placards.

But the vast majority cheered her, "Thank you, Hillary!" and him, "Yes, we can!"

They held new signs for the new times: "UNITY FOR CHANGE."

As the dynamic duo glowed onstage, a Clinton staffer circulated through the press corps with word that Hillary and Bill Clinton had gone online to give the maximum contribution allowed by law to the Obama for President campaign.

It was the picture-perfect day of togetherness that Barack Obama had wanted.

It was not entirely believable, but politics is the art of pragmatism.

All About Hillary Clinton • Democratic Party