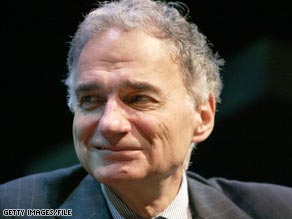 Ralph Nader is running for president as an independent.

Speaking with Colorado's Rocky Mountain News, Nader accused Obama of attempting to "talk white" and appealing to "white guilt" in his quest to win the White House.

"There's only one thing different about Barack Obama when it comes to being a Democratic presidential candidate. He's half African-American," Nader told the paper in comments published Tuesday.

"Whether that will make any difference, I don't know. I haven't heard him have a strong crackdown on economic exploitation in the ghettos. Payday loans, predatory lending, asbestos, lead. What's keeping him from doing that? Is it because he wants to talk white? He doesn't want to appear like Jesse Jackson? We'll see all that play out in the next few months and if he gets elected afterwards," Nader added.

Obama said Wednesday in Chicago, Illinois, that Nader was simply trying to "get attention."

"I don't think he's spent a lot of time looking at the record of Barack Obama," Gibbs said on MSNBC.

Nader is a longtime consumer advocate who was blamed by many Democrats for Al Gore's loss in the 2000 presidential election; they said he claimed votes that would otherwise have gone to their candidate.

He said Obama's top issue should be poverty in America, given his racial heritage.

Watch Nader describe whom the Democrats should be "going after" »

"I mean, first of all, the number one thing that a black American politician aspiring to the presidency should be is to candidly describe the plight of the poor, especially in the inner cities and the rural areas, and have a very detailed platform about how the poor is going to be defended by the law, is going to be protected by the law and is going to be liberated by the law," he said. "Haven't heard a thing."

Nader also said Obama is making a concerted effort not to be "another politically threatening African-American politician."

Nader formally entered the presidential race in the spring, expressing disappointment with both remaining Democratic candidates at that time.

"They are both enthralled to the corporate powers," he said of both Obama and Sen. Hillary Clinton. "They've completely ignored the presidential pattern of illegality and accountability; they've ignored the out of control waste-fraud military expenditures; they hardly ever mention the diversion of hundreds of billions of dollars to corporate subsidies, handouts and giveaways; and they don't talk about a living wage."

All About Ralph Nader • Barack Obama