(CNN) -- Sen. Barack Obama said evangelical leader James Dobson was "making stuff up," when he accused the Illinois senator of distorting the Bible and taking a "fruitcake interpretation" of the U.S. Constitution. 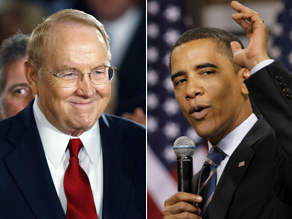 "Any notion that I was distorting the Bible in that speech, I think anyone would be hard pressed to make that argument," Obama told reporters on board his press plane Tuesday night.

"There is no need to 'make stuff up' as it relates to Sen. Obama's interpretation of Scripture and the role of religion in the public square. His statements and record make clear his questionable perception of both. ... He is editing God's word to fit his liberal worldview, and the more exposure his views on these matters get, the more obvious this will become to American Christians."

In comments aired on his radio show Tuesday, Dobson criticized the presumptive Democratic presidential nominee for comments he made in a June 2006 speech to the liberal Christian group Call to Renewal.

CNN's Ed Hornick and Emily Sherman contributed to this report.