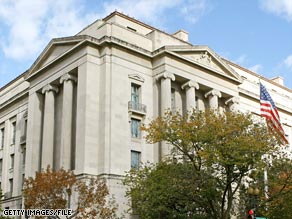 A bias against liberals existed in a Justice program meant to hire young lawyers, an investigation found.

Esther Slater McDonald, a political appointee at the Justice Department, "wrote disparaging statements about the candidates' liberal and Democratic Party affiliations on the applications she reviewed and ... she voted to deselect candidates on that basis," said the report by Inspector General Glenn Fine. McDonald, who has left the department, refused to be interviewed for the investigation.

It found two of three members of a screening committee considered political views and experience when choosing new lawyers for the Justice Department Honors Program and Summer Law Intern Program.

The report found that McDonald and Michael Elston, the chief of staff to Deputy Attorney General Paul McNulty, engaged in misconduct, an administrative violation. The third member of the screening committee, career lawyer Dan Fridman, was cleared of any involvement in the politicization of the process.

Elston was interviewed by the investigators, who asked him about the role of former Justice Department official Monica Goodling in politicizing the selection process.

Elston told investigators he could not recall Goodling telling him to select lawyers who appeared to share Attorney General Alberto Gonzales' philosophy. Goodling testified before a House panel last year that she had told Elston he should identify such candidates.

Goodling directed Elston to lead the selection committee in 2006. She and Elston have both left the Justice Department. She refused to be interviewed for the inspector general's report.

As a result of the controversy, the hiring process was changed in 2007 to insulate hiring decisions from political considerations.

Both Justice Department policy and federal law prohibit discrimination in hiring for career positions on the basis of political affiliations.

The report did not find clear evidence that an earlier screening committee took political considerations into account. It says data from 2002 shows a disparity in the hiring of liberal and conservative candidates, but there were no complaints about the committee's work from 2003 to 2006, when Goodling put Elston in charge of the process.

The report Tuesday is the first of perhaps several to be issued as the broad-ranging investigation into the role partisan politics has played in the Justice Department during the Bush administration.

Goodling is expected to be a central figure in later inspector general reports examining efforts to increase the influence of conservatives in the department.

All About U.S. Department of Justice • Democratic Party • Alberto Gonzales