(CNN) -- As a presidential candidate, Barack Obama has proven he's "better, stronger, faster" than any other Democrat in the race. He's the Six-Hundred Million Dollar Man. 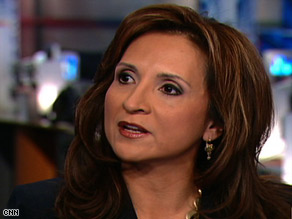 Last week, he opted out of the national campaign finance regime and is banking on his fundraising track record to build a war chest unlike any this country has seen since Richard Nixon's in 1972.

As the late Sen. Everett McKinley Dirksen once said, "A billion here, a billion there -- pretty soon you're talking real money." But what can Obama and the Democrats do with all the money they expect to raise?

The post-Watergate campaign rules, one national consultant reminded me, tried to keep both candidates in the general election to the same general level of spending. These rules, written largely by Democrats, were supposed to keep the playing field level by keeping the competition about ideas and issues, not who had the most money.

Is Obama trying to buy the election? He threatens to outspend McCain by six -- perhaps eight --- to one. Now, rather than engage in a "Great Debate" about America's future, Obama is trying to win through tactics.

Since Nixon, most candidates have followed a predictable strategy: Run an ideological campaign during the primaries to lock up your base -- then move to the center for the general election.

This allows resources to be husbanded for fall campaign spending to increase turnout among people who only might vote -- including self-described independents, youth voters and so-called presidential-year voters, who only come out "when it's really important."

A Nixon-sized war chest lets Obama smash the mold with a five-tiered campaign appealing to specific voter groups, each of whom responds to messages based on self-identification.

The first campaign will be aimed at traditional Democrats; Obama would have to run this one regardless of money on hand. It needs to appeal to traditional liberals -- upper income, highly educated urban and inner suburbanites are already behind Obama -- and traditional Democrats, the working class voters who helped Sen. Hillary Clinton win Ohio and Pennsylvania.

In this kind of campaign, the big question would normally be: "Do we run a 50-state campaign like Reagan '84 or do we campaign, like Bush and Kerry, based on the Electoral College?" Unlimited money means that's not a problem -- and Obama is free to launch four additional campaigns, the first aimed at Republicans.

His first post-primary TV spot is a case in point. While similar to Bill Clinton's first ad in the 1992 general election, it does more. One top Republican ad consultant I talked to said, "Obama jumped across the 50-yard line and is now on Republican turf" with that TV spot that speaks of tax cuts and welfare reform. ...These appeals will be countered strongly by Republicans who see this approach as disingenuous."

The next campaign is for African-Americans already excited by the first black presidential candidate. This key here is mobilization, which will occur largely in black churches using faith and values messages and on urban media, driving up turnout while still breaking eight or nine to one in favor of the Democrats.

Another campaign is targeted at Hispanics.

Obama has to go beyond the "Si Se Puede" (Yes, we can) farm workers message and You Tube hip-hop videos and discuss faith and values, pocketbook issues and military service if he expects to appeal to culturally conservative, business-minded Latino voters.

These voters gave George W. Bush 44 percent of their vote in 2004, but they don't like party labels and, candidly, don't much like the Republicans these days either after the congressional GOP's ham-handed attempts at anti-immigrant immigration reform.

The last is the biggest long shot: evangelicals, and Obama is already reaching out to them. Though thought of as "extremely conservative," they are broadening their concerns about social justice issues and the environment. Their new-realized concerns intersect with Obama's message, creating a coalition of interests that could prove useful.

As I alluded to earlier, an unlimited campaign war chest allows Obama and the Democrats to compete full out against the GOP in states where the Republicans are usually strong.

It also allows the Democrats to go toe-to-toe against the GOP in swing states like Missouri, Michigan and Colorado -- not to mention Ohio and Pennsylvania.

No matter how much America spends on presidential campaigns, it's less than what's spent on soft drink and snack food ads. With close to half a billion dollars available for the fall campaign, Obama can advertise himself like he was Lays Potato Chips or Coke Zero.

He can buy network television ads, not just regional "spots." And he can afford anything from O'Bobble-heads at the World Series to signage on the Goodyear Blimp.

He can buy ads in movie theaters or project campaign commercials on the sides of tall buildings during rush hour in America's biggest cities.

Despite all this, however, the cart still may be before the horse. Money isn't everything. If it were, Mitt Romney would be the Republican candidate, not John McCain. Obama needs to remember he outspent Hillary Clinton two-to-one in Texas and Ohio and three-to-one in Pennsylvania and still lost in those states -- badly.

McCain's fundraising numbers have improved considerably in the last few weeks. And the Republican National Committee has nearly 13 times more money for the fall election than the Democrats. It is true that Republicans tend to give more generously to institutions while Democrats tend to give, and in large amounts, to causes and candidates. But every voter nowadays is concerned about ethics in Washington and every candidate talks about it. And in this environment, is it possible to have too much money, no matter how you spend it?

Leslie Sanchez was director of the White House Initiative on Hispanic Education from 2001 to 2003 and is the author of "Los Republicanos: Why Hispanics and Republicans Need Each Other."