(CNN) -- Sen. John McCain on Monday called for a $300 million prize to whoever can develop a battery that will "leapfrog" the abilities of current hybrid and electric cars. 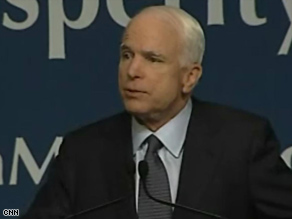 Sen. John McCain wants someone to develop a battery that can "leapfrog" those available in current electric cars.

Citing high oil prices, the Republican presidential candidate said he wants his offer to "deliver a power source at 30 percent of the current costs."

"[The prize would amount to] $1 for every man, woman and child in the U.S. -- a small price to pay for helping to break the back of our oil dependency," McCain said during a town hall-style meeting at California's Fresno State University.

McCain said the new automobile battery should have "the size, capacity, cost and power to leapfrog the commercially available plug-in hybrids or electric cars."

"In the quest for alternatives to oil, our government has thrown around enough money subsidizing special interests and excusing failure," McCain said. "From now on, we will encourage heroic efforts in engineering, and we will reward the greatest success."

McCain also called Monday for a "Clean Car Challenge" for U.S. automakers, hoping to spur them to develop and sell vehicles with no carbon emissions. The challenge would allow $5,000 tax credits to buyers of such cars, making those vehicles more appealing to consumers and thus easier to sell.

"We're going to see technology for electric-powered cars that are going to be [made cheaper] with our incentives," McCain said.

McCain also spoke against policies that he said "prevent consumers from benefiting" from ethanol not made from corn. He cited the U.S. subsidies for corn-based ethanol and tariffs on sugar cane-based ethanol from Brazil.

"Instead of playing favorites, our government should level the playing field for all alcohol fuels that break the monopoly of gasoline, both lowering gasoline prices and carbon emissions," he said.

McCain's remarks came a day after his Democratic rival, Sen. Barack Obama, called for greater oversight for energy traders. Obama's campaign said many economists believe speculation could be adding between $20 and $50 to the price of a barrel of oil; the price per barrel closed near $135 on Friday.

On Monday, the Illinois Democrat turned to the subject of working women, criticizing McCain for opposing a bill that would have made it easier for people to sue over pay discrimination.

The bill, dubbed the Fair Pay Restoration Act, would have rolled back a 2007 Supreme Court ruling that a person who claims pay discrimination must file a complaint within 180 days of that discrimination taking place.

Senate Republicans blocked the bill, which Obama co-sponsored, in April. Obama, in a speech to women at the Flying Star Cafe in Albuquerque, New Mexico, said McCain "thinks the Supreme Court got it right."

"He opposed the Fair Pay Restoration Act," Obama said. "He suggested that the reason women don't have equal pay isn't discrimination on the job -- it's because they need more education and training. That's just wrong."

Obama said that in the United States, women earn only 77 cents for every dollar earned by men. Obama claimed that McCain said the Fair Pay Restoration Act would have opened "us up to lawsuits for all kinds of problems."

"But I can't think of any problem more important than making sure that women are getting a square deal on the job. It's a matter of equality. It's a matter of fairness," Obama said. "I'll continue to stand up for equal pay as president. Sen. McCain won't, and that's a real difference in this election."

Meanwhile, monthly campaign finance reports filed in June show the candidates are nearly level in the amount of money they have available to spend before their parties' conventions.

According to a report filed with the Federal Election Commission, Obama had $43.1 million in the bank at the start of June. However, $9.8 million of that amount is designated for the general election, meaning only the remaining $33.3 million may be spent before the conventions.

McCain, according to his report filed with the FEC, began June with about $31.4 million available to spend before the conventions.

Obama said last week he would not accept public financing. Republicans and outside analysts have said Obama found he could raise more money than public financing would allow him to spend.

The Democratic convention is scheduled for August 25-28 in Denver, Colorado. The GOP convention is set for September 1-4 in Minneapolis and St. Paul, Minnesota.

All About Barack Obama • John McCain • Oil Production and Refining