WASHINGTON (CNN) -- In recent days, Sen. Barack Obama has backed off his harshest criticisms of the North American Free Trade Agreement, and he's changed his stance on campaign financing, electing to decline the federal funds for the general election -- prompting charges of flip-flopping. 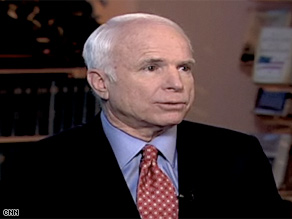 Polls show Sen. John McCain with about a third of the Hispanic vote nationwide.

Obama's campaign says Sen. John McCain has contradictions of his own, namely on illegal immigration.

According to The Associated Press, several people who were at the meeting said McCain assured them that he would push for comprehensive immigration reform if he's elected president.

At a Republican debate at the Reagan Library in January, McCain was asked whether he would still vote for his original measure.

"No, I would not ... because we know what the situation is today ... that people want the borders secured first," he said.

"The original proposal, I opposed. Sen. McCain's new proposal, I support, which is to ensure you have border security before you have any other type of reform," L.A. County Supervisor Mike Antonovich said.

After the Chicago meeting, the Obama campaign's communications director, Robert Gibbs, charged that McCain was trying to have it both ways.

"It's hard for me to understand how you can sit in front of 150 Hispanic leaders in Chicago and leave them with the impression that you support comprehensive immigration reform and have that not directly contradict the fact that sitting in the Reagan Library in the midst of a Republican primary. How you can say that you didn't intend to vote for your own bill," Gibbs said.

McCain is now getting just over a third of the Hispanic vote nationwide, according to CNN/Opinion Research Corp. Polls from April and June. Obama garnered 61 percent to McCain's 34 percent.

McCain must try to keep conservatives happy while making sure his Hispanic support doesn't collapse.

How's he going to do it? His campaign says he will be addressing several major Hispanic groups in the next month.

CNN asked the McCain campaign for a response to Gibbs' comments. A spokesman said, "Despite the wildly misinformed opinions of Barack Obama's spokesman, John McCain fundamentally believes that we need to secure our border, and then move forward to address the need for immigration reform in a respectful and compassionate manner that recognizes that we are all God's children. That's his position yesterday, today and every other day -- before all the groups he meets with.''

All About John McCain • Immigration • Hispanic and Latino Issues