Ties to Bush on offshore drilling may hurt McCain this fall

WASHINGTON (CNN) -- As he tries to woo independent voters, Sen. John McCain is relying on his image as a maverick, making it clear he's no President Bush. 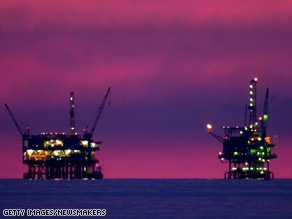 Sen. John McCain wants an end to the federal ban on offshore drilling, a reversal from his 2000 campaign.

But the timing of Bush's support for offshore oil drilling this week may spell trouble for McCain's efforts to distance himself from the embattled White House.

The president on Wednesday urged Democratic leaders in Congress to lift the ban on offshore drilling -- just as McCain has been making his own energy pitch for the same.

"The next president must be willing to break with the energy policies, not just of the current administration, but the administrations that preceded it, and lead a great national campaign to achieve energy security for America," McCain said Wednesday in Springfield, Missouri.

Map: See where drilling is and isn't allowed »

The senator from Arizona outlined an energy plan that would include lifting the ban on offshore drilling for oil, a reversal of his position during his 2000 campaign.

His speech followed an address Tuesday in Houston, Texas, in which he also pushed offshore drilling.

McCain and the president appear to be marching in lockstep on how to deal with $4 a gallon gas. They are demanding Democrats end the federal ban on offshore drilling, saying it could lead to a drop in oil prices given the expectation of increased supply.

"I know the Democratic leaders have opposed some of these policies in the past," Bush said. "Now that their opposition has helped drive gas prices to record levels, I ask them to reconsider their positions."

But Sen. Barack Obama, the presumptive Democratic nominee, argues that offshore drilling will not help lower gas prices in the short term.

"At best, you're looking at five years or more down the road. And even the most optimistic assumptions indicate that offshore drilling might reduce the overall world price of oil by a few cents," Obama has said.

Obama's solution, a push for plug-in hybrid cars and other alternatives to oil, will not give consumers short-term relief either.

Congressional Democrats are determined to block the president's push for offshore drilling, prohibited by a 1981 law and a 1990 executive order.

"When Congress lifts the legislative ban, I will lift the executive prohibition," Bush said.

The issue also makes for a fascinating family drama since the president's father, President George H.W. Bush, signed the order banning offshore drilling, while his brother Jeb more recently opposed such drilling when he was governor of Florida.

Florida's current governor, Charlie Crist, has been an opponent of offshore drilling, but he now has an open mind about it since McCain's embrace. Crist's name has come up as a possible vice presidential running mate on the GOP ticket.

"It's the last thing in the world I'd like to do, but I also understand what people are paying at the pump, and I understand the drag it is on our economy," Crist told the St. Petersburg Times this week. "Something has to be done in a responsible, pragmatic way."

In the long run, however, the fact that Bush has embraced this position on offshore oil drilling as well may make it more difficult for McCain to portray himself as an independent.

McCain's stance also may hurt him in California, a state with 55 electoral votes.

The proposal could put McCain at odds with environmentalists who say it is incongruous with his plans to combat global warning. California Gov. Arnold Schwarzenegger, a McCain ally, also opposes offshore drilling.

Schwarzenegger released a statement Wednesday saying he still does not believe it makes sense to have such drilling off the California coast.

All About Oil Production and Refining • John McCain