WASHINGTON (CNN) -- Even as FEMA rushes sandbags, generators and pumps to the flooded Midwest, a government report questions the agency's ability to distribute relief supplies effectively during major disasters. 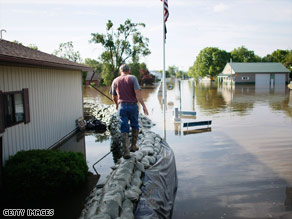 Field employees for the Federal Emergency Management Agency still rely on ad hoc computer systems and, in some instances, paper forms, to order and distribute goods, said the report, which was released Tuesday.

Cots, tarps and other items donated by outside agencies and charities are not easily integrated into FEMA's supply chain, the report said. Field personnel also could place duplicate orders for disaster goods because some of the agency's computer systems don't talk to each other, it said.

"As a result, FEMA may be hindered in its ability to perform disaster response in an effective and timely manner," the report said.

The report by Department of Homeland Security Inspector General Richard Skinner was written before a series of storms flooded communities in the Midwest this month.

In a lengthy response, FEMA said it already had identified the same shortcomings, had taken steps to upgrade its logistics systems and was on track to improve other systems in the coming months and years.

It was not immediately clear how some of the logistical problems identified in the report might affect relief efforts for this month's flooding, FEMA's biggest challenge since hurricanes Katrina and Rita struck the Gulf Coast in 2005.

The response to those storms exposed deep flaws within the agency, including breakdowns in its ability to track food, water, ice and other supplies.

Congress responded by reorganizing FEMA, with the agency chief reporting directly to the DHS secretary.

FEMA maintains eight permanent distribution centers across the United States and its territories that are stockpiled with supplies and office equipment.

But FEMA's logistics systems do not track disaster goods from initial shipment to final delivery, Skinner said. During disasters, goods are shipped from the distribution centers to federal operational staging areas, or FOSA locations, and then to state facilities or points where the goods are distributed to victims.

The agency's order tracking system follows goods to the FOSA locations but does not track their subsequent distribution, according to the report.

FEMA managers must contact field personnel regularly during disasters, forcing the latter to "spend time and effort" to track inventory, the report said.

Field personnel developed an "eFOSA system" to track inventory, but the system does not operate on the FEMA network, the report said.

The agency has asked a contractor to upgrade the order tracking system, but field personnel say the upgrade will make the system "slower and less user-friendly," the report said.

The system also does not provide information about goods shipped to FOSA locations by other agencies, such as the Army Corps of Engineers. For instance, it was unable to track cots provided by the American Red Cross during California wildfires in 2007, according to the report.

And FEMA personnel use two separate systems to track commodities, such as food and water, and property, such as generators and cell phones, according to the report.

"Without a comprehensive system, FEMA personnel must spend extra time and effort to manage goods," the report said. "For example, when distribution center personnel prepare a kit of furniture and supplies for a field office, it requires numerous steps to complete the shipment."

All About FEMA • Hurricane Katrina • Floods