WASHINGTON (CNN) -- Congress passed a $300 billion farm bill over President Bush's veto for a second time Wednesday, a step made necessary by a clerical error when the original bill passed. 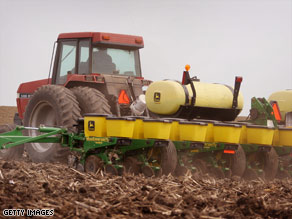 The Senate voted 80-14 to approve the measure over Bush's objections, following a 317-109 vote in the House of Representatives. Both votes were well above the two-thirds majority needed to override the veto, which Bush delivered Wednesday morning.

Congress overrode an earlier veto of the farm bill last month, even though lawmakers had discovered that 34 pages were missing in the version originally sent to the White House. In spiking the latest version, Bush said he objected to its continued subsidies for the wealthy and its use of budget gimmicks to hide a $20 billion increase in spending.

But Sen. Kent Conrad, the chairman of the Senate Budget Committee, said the measure actually saves the government $110 million.

"This bill does not add to the deficit or debt, because this bill is paid for," he said. "That is not my claim. That is the finding of the Congressional Budget Office."

The discovery of the missing section, Title III, prompted concerns from House Republicans that the override vote was improper.

House Speaker Nancy Pelosi said the sections of the bill that were originally sent to the president had become law after Congress voted to override Bush's first veto.

But to put Title III into effect, Congress re-passed the entire legislation, including the missing pages, and resent it to Bush. The House voted 306-110 at the end of May. The Senate voted 77-15 for the bill at the beginning of June.

Two-thirds of the $300 billion in spending for the farm bill will go for nutrition programs such as food stamps. Another $40 billion will go toward farm subsidies, and $30 billion is allocated for payments to farms to keep land idle and other environmental programs.

After vetoing the latest version of the farm bill, Bush scolded Congress on Wednesday for not "modifying certain objectionable, onerous and fiscally imprudent provisions. ... I am returning this bill for the same reasons as stated in my veto message."

When he vetoed the first version of the farm bill, Bush said it "continues subsidies for the wealthy and increases farm bill spending by more than $20 billion, while using budget gimmicks to hide much of the increase."

The president said it would hurt efforts to improve American farmers' access to overseas markets.

Congress has passed one other bill over Bush's objections: legislation for a $23 billion water project that the president vetoed in 2007.