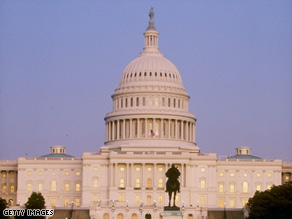 The House sent an unemployment benefits extension to the Senate on Thursday.

The House approved the bill 274-137 and sent it to the Senate. More than two-thirds of the House voted for the bill, enough to override a veto from President Bush.

But it's unclear when the measure will be taken up by the Senate, where its future is uncertain.

In the House, the measure enjoyed significant Republican support despite the veto threat.

House Minority Whip Roy Blunt of Missouri said the Republican leadership's goal was to reduce GOP defections so that we have "a veto-sustaining number."

The approval was the House's second vote on the measure. On Wednesday, when the bill was brought to the floor, the House voted for it 279-144, a majority, but short of the two-thirds that House rules required for approval at the time.

The measure would provide up to 13 weeks of benefits to unemployed workers who have used up their regular unemployment, which in most states runs for 26 weeks. The additional benefits would have expired in March.

Workers in high-unemployment states would be eligible for an additional 26 weeks of benefits.

According to Democratic aides of the House Ways and Means Committee, the extended benefits would be equal to the benefits paid by regular unemployment insurance, which aides said averages $290 a week.

The additional benefits, if passed, are to be paid out of federal unemployment benefit trust funds, which contain more than $35 billion, the aides said.

"The American people should only have one question in their minds today: How bad does it have to get before the president and the Republican leadership decides to join the Democrats and extending a helping hand ... for unemployment benefits?" Rep. Jim McDermott, D-Washington, said Thursday.

But the White House called the unemployment extension "a flawed bill" and said the president's advisers would recommend that he veto the bill if it comes to his desk.

Fratto also said the White House objected to the low threshold that workers must meet to be eligible for the extended benefits, saying that "under this bill, individuals who have worked as little as two weeks could qualify for up to 52 weeks of total unemployment benefits."

According to the Bureau of Labor Statistics, the unemployment rate rose from 5.0 percent to 5.5 percent in May, with the number of unemployed workers increasing by 861,000 to 8.5 million.

The growth in the ranks of the unemployed was the largest one-month increase in the unemployment rate in 20 years.

The bureau also found that the number of workers who had been unemployed for over six months rose by 197,000 in May, to 1.6 million.

All About Unemployment Rate • U.S. House of Representatives • Economic Issues