(CNN) -- Sen. Barack Obama is bracing for the general election fight, and conservatives are likely to throw some jabs at his wife, Michelle Obama, as well. 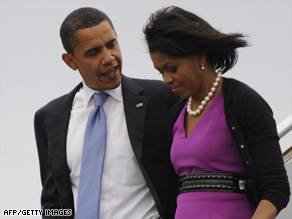 Sen. Barack Obama has told critics to "lay off my wife," Michelle Obama.

Conservatives view the presumptive Democratic nominee's wife as a target of opportunity.

"Considering there are so many issues -- legitimate issues -- that you can use on Barack Obama, to attack his wife to me is sheer utter stupidy of the highest level," said Stephen Marks, a Republican strategist. "Mr. Obama is going to come to his wife's defense, and it's going to humanize both of them."

Michelle Obama was widely criticized on conservative blogs when she said "For the first time in my adult lifetime, I am really proud of my country" at an appearance on behalf of her husband in Milwaukee, Wisconsin, in February.

The Obama campaign said Michelle Obama's comment reflected her excitement about the grass-roots support her husband is receiving, but conservatives said the statement raised questions about her patriotism.

In May, the Tennessee Republican Party used video of Michelle Obama's comments in a TV ad that aired during one of her husband's campaign stops in the state.

The ad features Tennesseans saying why they are proud of America while repeatedly cutting to Michelle Obama's comments.

The Obama campaign called the ad "shameful," and it was condemned by the state's two Republican U.S. senators.

After his wife's comments were criticized, Barack Obama said Michelle did not mean what she said.

"Statements like this are made, and people try to take it out of context and make a great big deal out of it, and that isn't at all what she meant," he told San Antonio radio station WOAI in February.

"What she meant was, this is the first time that she's been proud of the politics of America," he said. "Because she's pretty cynical about the political process, and with good reason, and she's not alone. But she has seen large numbers of people get involved in the process, and she's encouraged."

Republican strategists say the wife of the Democratic presidential nominee is fair game.

"There is less information about him to temper her comments against, so what she says represents something a lot more important than perhaps other candidates in the past who have had a longer track record," said Rachel Marsden, a Republican strategist.

The issue of Michelle Obama as a potential liability made simultaneous headlines on both coasts, with articles in both The New York Times and the Los Angeles Times.

The newspapers pointed to relentless online rumor mills, criticism on conservative blogs and articles in conservative magazines, like the National Review, critical of Michelle Obama.

Watch how the Obama campaign is fighting Internet rumors »

New York Times columnist Maureen Dowd wrote that the backlash against Michelle Obama, who is black, was a "good preview of how Republicans will attack Michelle, suggesting that she does not share American values, mining a subtext of race."

The potential first lady appears to be bracing for what may lie ahead.

"We're trusting that the American voters are ready to talk about the issues and not talking about things that have nothing to do with making people's lives better," Michelle Obama told ABC News during a joint interview in May.

But Barack Obama quickly added, "I also think these folks should lay off my wife."

It's advice the opposition might want to heed, Marks said.

You only have to look back to 1992, when then-Gov. Bill Clinton stood up to critics of his wife, to see how an attack on a politician's spouse can quickly boomerang, Marks said.

Clinton later went on to win the Democratic nomination that year -- and the presidency.