(CNN) -- The economy is the No. 1 issue on the minds of American voters, and Sens. John McCain and Barack Obama offer vastly different plans to improve it. 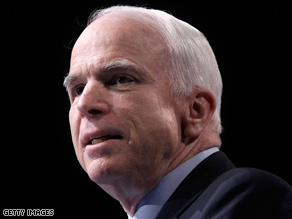 Sen. John McCain says it's his goal to get the economy "running at full strength again."

McCain told a group of small-business owners Tuesday that his goal as president will be "to get our economy running at full strength again."

The senator from Arizona is attempting to paint Obama as a typical Democrat who wants to raise taxes and regulate government, charging that Obama would institute the largest tax increase in more than 60 years.

Speaking at the National Small Business Summit in Washington, McCain laid out the differences between his economic proposals and Obama's plan.

"On tax policy, health-care reform, trade, government spending and a long list of other issues, we offer very different choices to the American people," he said.

"No matter which of us wins in November, there will be change in Washington. The question is, what kind of change? ... Will we enact the largest single tax increase since the Second World War, as my opponent proposes, or will we keep taxes low for families and employers? ... This election offers Americans a very distinct choice about what kind of change we will have."

Obama kicked off his two-week campaign swing Monday focusing on the economy. His tour takes him through battleground states that will be up for grabs in November.

Watch Obama's plan for the economy »

Obama blasted McCain's economic plan as a "continuation of Bush economic policies: more tax cuts to the wealthy, more corporate tax breaks, more mountains of debt and little to no relief for families struggling with the rising costs of everything from health care to gas prices to a college education."

McCain said Tuesday that "under Sen. Obama's tax plan, Americans of every background would see their taxes rise: seniors, parents, small-business owners." iReport.com: How is the economy treating you?

In response to McCain's speech, Obama said McCain's prescription for the economy is "wrong for the country" and McCain's characterization of his plan is "just wrong."

"Let me be clear. My tax reform plan would cut taxes for 95 percent of workers. ... I've said that John McCain is running to serve out a third Bush term. But the truth is, when it comes to taxes, that's not being fair to George Bush," Obama said.

Obama said Monday that lawmakers should inject an additional $50 billion into the economy.

"Such relief can't wait until the next president takes office. ... That's why I've called for another round of fiscal stimulus, an immediate $50 billion to help those who've been hit hardest by this economic downturn," Obama told a crowd in Raleigh, North Carolina. He said he supports the expansion and extension of unemployment benefits, as well as a second round of tax rebate checks.

The economy is likely to be at the center of the race for the White House. According to a CNN poll released last week, it's the most important issue for voters in deciding whom to vote for, topping Iraq, health care, terrorism and immigration.

And the issue couldn't be more polarizing. McCain and Obama represent opposite ends of the economic spectrum.

McCain is a classic fiscal conservative who believes in a smaller government that should lower taxes. Obama thinks the government should play a more active role in leveling the field for lower income workers.

McCain thinks the government should boost the economy by having lower tax rates, which would in turn increase savings. He supports making permanent the Bush tax cuts of 2001 and 2003, and he wants to repeal the Alternative Minimum Tax.

That tax was put in place to make sure the wealthy paid personal income tax, but it now causes many middle-class Americans to pay higher federal taxes than they used to.

Obama puts more of a focus on the budget deficit. He would keep the Bush tax cuts in place for most Americans, but not for those who make roughly $250,000 a year or more. He would also get rid of income taxes for seniors making less than $50,000 annually.

McCain thinks the best way to deal with the deficit is by scaling back government spending. He proposes a one-year freeze on discretionary spending to assess which programs should stay and which should go. He has also said he would demand that Congress eliminate earmarks.

Obama has said he wants to cut earmarks to levels no greater than they were in 2001 and reinstate so-called pay-as-you-go rules, under which lawmakers cannot pass spending measures or tax cuts without paying for them by making cuts to other programs or raising an equal amount of money.

McCain thinks corporate taxes should be cut so businesses have more money to hire new workers.

On the housing and mortgage crisis, McCain would consider greater intervention by the federal government to limit effects of mortgage crisis if current measures fail. He believes a government bailout should be a last resort.

Obama proposes creating a $10 billion fund to help prevent foreclosures and eliminating some taxes and fees for families who must sell their homes. He would also provide tax credits to 10 million middle class homeowners who struggle with mortgage costs.

McCain also pushes the idea of suspending the federal gas tax for the summer, but Obama has called that plan a gimmick.