WASHINGTON (CNN) -- Sen. Hillary Clinton formally ended her presidential campaign Saturday, saying to a packed house of thousands of supporters, "I will continue to stand strong with you every time, every place and every way that I can." 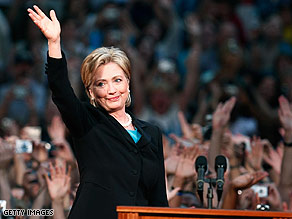 Sen. Hillary Cllinton thanks her supporters Saturday in a speech in which she endorsed Sen. Barack Obama.

She urged the cheering crowd to support Illinois Sen. Barack Obama, the presumptive Democratic nominee, in his bid for the White House, saying she and supporters should "take our energy, our passion and our strength and do all we can to help elect Barack Obama ... I ask all of you to join me in working as hard for Barack Obama as you have for me."

CNN examines the two nominees for president. Who are they, and how do they plan to get elected?
Sat & Sun, 8 p.m. ET

Obama watched the speech over the Internet, a campaign aide said. He put in a call to Clinton afterward but was told by a Clinton assistant that she was speaking with supporters.

During her speech, Clinton encouraged party unity, acknowledging that the fight has been hard, but saying "the Democratic Party is a family, and now it's time to restore the ties that bind us together."

"To all those who voted for me, my commitment to you is unyielding. You have inspired and touched me. You have humbled me with your commitment," she said. "Eighteen million of you from all walks of life -- women, and men, young and old, Latino and Asian, African-American and Caucasian, rich and poor, middle-class, gay and straight ... you have stood with me," she said.

Clinton has battled Obama in a primary season that stretched over nearly 18 months and 57 contests, culminating in Obama's winning the 2,118 delegates needed to clinch the party's nomination Tuesday.

A Clinton supporter told Gloria Borger, a CNN senior political analyst, shortly after the rousing speech that "this was the Hillary I worked with and supported. I suspect I'll never understand why this Hillary wasn't visible more often."

Clinton noted that both she and Obama had made history in their campaigns.

"When I was asked what it means to be a woman running for president, I always gave the same answer: I was proud to be running as a women, but I was running because I thought I'd be the best president," she said. "But I am a woman, and like millions of women, I know that there are still barriers and biases out there, often unconscious. And I want to build an America that respects and embraces the potential of every last one of us.

"We must make sure that women and men alike understand the struggles of their grandmothers and their mothers and that women enjoy equal pay and equal respect," she said. "Let us resolve and work toward achieving some very simple propositions: There are no acceptable limits and there are no acceptable prejudices in the 21st century in our country."

"I wish she was going on the ticket instead," one supporter said. "But I think she's making a good stand down. She's a lady. She's doing it well."

Clinton was accompanied by her husband, former President Clinton; their daughter, Chelsea; and her mother, Dorothy Rodham.

"The work begins tomorrow for Sen. Obama to go out there, rally her supporters, earn their respect and win with them this November," she said.

Clinton said that as she spoke, America's 50th woman in space was orbiting Earth in the space shuttle Discovery. If the nation can put 50 women in space, it can launch a woman into the White House, she said to loud cheers.

"Although we weren't able to shatter this highest, hardest glass ceiling this time, thanks to you, it's got about 18 million cracks in it, and the light is shining through like never before," she said.

"It is this belief and optimism that Sen. Obama and I share," Clinton said, "that has inspired so many millions of supporters to make their voices heard. So today, I am standing with Sen. Obama to say, 'Yes, we can.' "

A CNN poll released Friday shows that the party is divided after a primary season that stretched over nearly 18 months and 57 contests.

Watch Suzanne Malveaux talk about what's next for the candidates »

Democratic voters appear to like an Obama-Clinton ticket. A CNN poll released Friday suggested that nearly half of Democrats, 54 percent, would support a joint ticket, but 43 percent would oppose it. The poll's margin of error was plus or minus 4.5 percentage points.

The Clinton camp made it widely known that she would accept the No. 2 slot if it were offered, but the push was viewed as putting undue pressure on Obama to pick his former rival.