Can Obama say no to Clinton?

(CNN) -- Sen. Barack Obama said Wednesday that he and Sen. Hillary Clinton will be "having a conversation in the coming weeks," but will they talk about sharing the ticket? 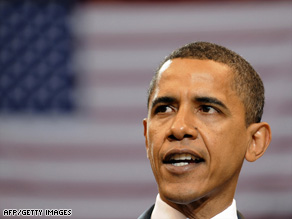 Now that Sen. Barack Obama is his party's presumptive nominee, everyone wants to know who will be the No. 2.

Fears of a divided party increased as the protracted primary season dragged on, but Obama and Clinton both insisted that the Democrats would unite once they have a nominee.

Now, that time has come, and although some top politicians say Obama must put Clinton on his ticket, others say Obama needs to say no.

Concern about the division in the party arose because Clinton and Obama appealed to such different segments of the electorate. Clinton did well with working-class voters and the elderly. Obama rallied the support of affluent, well-educated voters, African-Americans and the younger generation. iReport.com: What's your dream ticket?

Clinton won the big states -- like Florida, Ohio and Pennsylvania -- that she says are necessary in order to win in the fall.

Exit polls throughout the primary season have indicated that a significant portion of Clinton backers would not vote for Obama if he were to become the nominee.

"I think there's a danger that there will be an embittered Hillary group that will stay home or will vote for [John] McCain," said David Gergen, a CNN political contributor.

Watch analysts discuss what a joint ticket would accomplish »

He said he thought her speech Tuesday -- in which she did not concede -- showed defiance.

"In effect tonight, she was saying ... I have these 18 million people, and if you want them to come over and support you, you've got to listen to me, and you have to pay attention to what I want," he said.

Watch how Obama's camp is being pressured to pick Clinton »

Lanny Davis, former special counsel to President Clinton, has started a petition to get Hillary Clinton on the ticket.

"I said in the petition, 'We know this is your decision, Sen. Obama. Here are the reasons why we think we can help you in putting this country together again with your strengths and with her strengths to actually elect a president and a vice president.' "

The site says it "believes that both Sens. Clinton and Obama should run together for the general election, combining two awesome factions of energized voters and organized campaign strategists, to result in victory come November."

Some key backers of the "dream ticket" include Sen. Dianne Feinstein of California, Pennsylvania Gov. Ed Rendell and Sen. Charles Schumer of New York. They also endorsed Clinton in the primaries.

Billionaire businessman and BET founder Bob Johnson, a close adviser and friend to Clinton, also launched a campaign Wednesday to persuade Obama to offer Clinton the No. 2 spot, and the New York Observer on Wednesday used its editorial page to urge Obama to make Clinton his pick.

Watch what Johnson says about a "dream ticket" »

"Mr. Obama has shown enthusiasm for a new style of governing; having a vice president of Mrs. Clinton's capabilities and experience would go a long way toward effecting real change in Washington," the paper said.

Arianna Huffington, editor-in-chief of The Huffington Post, said she doesn't see a joint ticket in the future.

Huffington said that putting Clinton on the ticket would mean "having to deal not just with Hillary Clinton and her disappointment, but having to deal with Bill Clinton and the way he's been running the whole campaign."

Bill Clinton has come under fire for being too vocal in his criticisms of Obama.

Former President Carter has also said he does not see how Clinton would help Obama's ticket.

Lawmakers said Tuesday that Clinton said on a conference call that if asked by Obama, she would be interested in serving as his running mate, but Obama's campaign is staying mum on the issue.

Communications director Robert Gibbs said there was no discussion of the vice president spot when Obama and Clinton talked late Tuesday night.

"I think we'd just crossed the delegate threshold an hour or two before that, so obviously, the vice presidential process will begin in a little bit more earnestness today," he said on CNN's "American Morning."