(CNN) -- Sens. Hillary Clinton and Barack Obama face off Tuesday in the last contests of the Democratic primary season, bringing an end to a historic race that has produced months of excitement, but still no nominee. 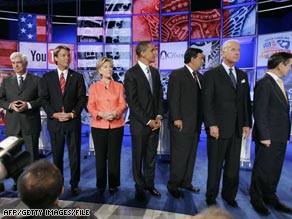 After months of primaries and caucuses, the Democratic party still does not have a nominee.

The road to the nomination has been fierce. The two have endured preacher-gate, Bosnia-gate, a bitter battle over the race card and other controversies that have framed this race.

From a crowded field of Democratic candidates taking the stage for a debate a year ago to the final two nominating contests that few thought would be contested, Obama and Clinton have battled it out to the end.

Clinton has become the favored candidate among working-class voters, women and the elderly, while Obama has emerged as the choice for well-educated, affluent voters, African-Americans and the younger crowd.

The contests come to an end Tuesday, exactly five months after a much wider field faced off in Iowa's first-in-the nation caucuses.

There was Obama, the junior senator from Illinois, campaigning on his message of change. There was Clinton, the New York senator and former first lady, who had been a prominent public figure for years and was favored to win it all.

Repeat runners Sen. Joe Biden and Rep. Dennis Kucinich were back for more. Biden went after his party's nomination in 1988, and Kucinich sought the top spot in 2004.

And then there was speculation that Al Gore would enter the race as the candidate who would unite the party's disparate factions.

This was wishful thinking perhaps from the legion of Gore supporters still frustrated by his razor-thin loss to George Bush in 2000.

Iowa Gov. Tom Vilsack got in, but got out early enough that his presence in the race is often overlooked. When the field of candidates was settled, it was apparent this was going to be a race pitting Clinton versus Obama.

Obama scored the opening win, forging his way to the top of the Democratic pack. Biden and Dodd called it quits.

Despite all the hype surrounding Obama's victory and his inspirational speech that followed, the momentum quickly switched to Clinton.

Clinton, who finished third in Iowa, made a surprise win in New Hampshire even though polls going into the contest showed Obama with a double-digit lead.

New Hampshire, which brought an end to Richardson's campaign, crowned Clinton the "comeback kid" -- a phrase coined for her husband in the 1992 race -- and she took the next two contests in Michigan and Nevada.

The Democrats next faced off in Florida. The state fell into Clinton's column and quickly became the center of a months-long delegate controversy.

The Democratic National Committee stripped Florida and Michigan of their delegates for scheduling their primaries too early. Clinton won both states, but the candidates had agreed not to campaign in either state, and Clinton was the only top-tier candidate on the Michigan ballot.

Watch what led to the DNC's decision »

As Obama amassed wins, Clinton pushed hard to get the states' delegates seated, and on the last day of May, the DNC decided to reinstate the delegations, with each delegate getting a half a vote at the convention.

The move did little to change the state of the race -- one that has been a Clinton-Obama battle since Edwards dropped out shortly before Super Tuesday.

Watch how the race could end »

Most thought Super Tuesday would decide the outcome, but the two front-runners split the 23 Democratic contests that fell on February 5.

The presidential hopefuls each argued their wins made them the stronger candidate: Clinton was winning the bigger states, but Obama was winning more states.

The candidates soldiered down the campaign trail, with stops to explain, denounce and detach themselves from some of their surrogates along the way.

He established a comfortable lead in pledged delegates, but Clinton maintained her lead among superdelegates.

Superdelegates are party leaders and officials who vote at the convention for the candidate of their choice. Because neither candidate will get enough delegates from the primaries and caucuses to clinch the nomination, the final decision will rest in the hands of the superdelegates.

Obama's winning streak left pundits questioning Clinton's viability, and even Bill Clinton said his wife had to win Ohio and Texas in order to keep her campaign alive.

Once again, she bounced back.

Clinton picked up important wins in the Ohio, Texas and Rhode Island primaries March 4. Obama won Vermont and the Texas caucuses. The next week, Obama won Mississippi and Wyoming.

The Democratic race was in limbo, and there was a six-week hiatus until the next contest.

Questions arose as to whether the party could unify once there was a nominee, but both candidates insisted the Democrats would rally behind whoever came out on top.

Some said the protracted battle was good for the party -- each candidate was mobilizing different parts of the electorate, and that could provide a boost in turnout in the fall.

The contests resumed April 22 in Pennsylvania. Clinton landed a big win, re-igniting her campaign. Her campaign boasted $10 million in donations in the 24 hours after her win.

But two weeks later, her momentum all but disappeared.

Obama cruised to a double-digit lead in North Carolina, and Clinton barely squeaked by in Indiana.

On the eve of what was expected to be a resounding win for Clinton in West Virginia, Obama took the lead in the superdelegate count.

At the beginning of the year, he had trailed Clinton by more than 100 superdelegates.

Clinton scored blowout wins in West Virginia and Kentucky, largely due to the state's blue-collar voters. Her wins brought attention to Obama's potential problem with that segment of the electorate, but did little to breathe life back into her campaign.

Clinton kept chugging along, as Obama appeared to be staggering toward the finish line.

Clinton landed another win in Puerto Rico on June 1, picking up the larger share of the state's 55 delegates.

The final two contests in Montana and South Dakota offer 31 delegates -- not enough to put Obama over the edge.

Still, his campaign predicted Sunday he would clinch the nomination this week, if not by Tuesday.

Obama on Sunday praised Clinton for her work in the Senate and said she was an "outstanding public servant," but indicated he's already moved out of primary mode.

"She is going to be a great asset when we go into November to make sure that we defeat the Republicans," he said.