(CNN) -- While all three presidential candidates are locked in a dead heat in potential matchups, a new CNN/Opinion Research Corporation poll suggests voters see major differences in each of their personal qualities. 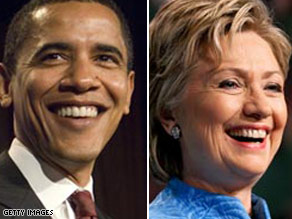 A new poll shows a majority of Americans say Barack Obama will bring about change.

When it comes to bringing about change, a majority of Americans -- 56 percent -- say Sen. Barack Obama will be able to achieve that task; 49 percent say the same for Sen. Hillary Clinton; and 39 percent say that for Sen. John McCain.

Survey respondents also ranked the Illinois senator highest -- 65 percent -- when asked who would work with both parties to get things done, compared with 56 percent who say McCain would and 52 percent who say Clinton would.

But Obama is also the only candidate who a majority of Americans -- roughly 60 percent -- say does not have the right experience to be president, the poll showed.

The poll also indicates that the Democrats may have the advantage on the issues most important to voters. Well over 50 percent report Obama and Clinton agree with them on the important issues, but only 39 percent say the same about McCain.

Watch how the economy is affecting the race »

McCain also does the poorest among the poll's participants when asked if the candidate cares about people like them: 51 percent said McCain did, compared with 55 percent who said the same of Clinton and 67 percent who said Obama cared about them.

"During the GOP primary season eight years ago, 52 percent of all Americans said that McCain agreed with them on important issues. ... That figure is down [Tuesday] to 39 percent."

Those surveyed also give the lowest marks -- 50 percent -- to McCain when asked if they'd be proud to have him as president. Clinton came in with 57 percent, and Obama garnered 62 percent.

The poll showed that 65 percent of Americans view the Arizona senator as a strong and decisive leader, compared with 63 percent who say the same of Clinton and the 59 percent for Obama.

While all three candidates have laid out clear visions for the country, Obama gets the highest mark in that category.

The poll surveyed 1,019 adult Americans on March 14-16 and carries a margin of error of plus or minus 4.5 percentage points. E-mail to a friend