Michigan revote decision up in the air

WASHINGTON (CNN) -- Now that officials in Florida nixed a primary revote, the focus has shifted to Michigan Tuesday where a proposal is taking shape for Democrats to hold a new presidential primary, a Democratic source close to the negotiations says. 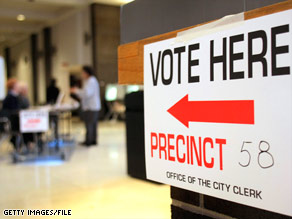 Voters go to the polls in Warren, Michigan, in the January 15 presidential primary.

The state party's leaders have been seeking a way to have Michigan's 156 delegates seated at the Democratic National Convention.

The national party stripped Michigan of its delegates last year, along with Florida's 211 delegates, when both states scheduled their primaries in January in violation of DNC rules.

Under the new proposal, Michigan would hold another primary on June 3.

The Democratic Party would reimburse the state for the cost of running the re-do, ensuring that cash was in hand before the voting began.

Sen. Hillary Clinton won Michigan's January 15 primary with 55 percent of the vote. Sen. Barack Obama was not on the ballot.

Florida held its primary on January 29, also in defiance of DNC rules.

After exhausting various options for a re-do -- including a mail-in primary -- the Florida Democratic Party surrendered Monday.

"We researched every potential alternative process -- from caucuses to county conventions to mail-in elections -- but no plan could come anywhere close to being viable in Florida," said state party chairwoman Karen Thurman in an e-mail sent to Florida Democrats late Monday afternoon.

Several voters CNN spoke with in Tallahassee, Florida, last week said they had little appetite for a revote.

"We have voted already, the energy time and money have been invested," said voter Jorge Lopez. "This is a great lesson for the national Democratic Party to learn."

Clinton's campaign sounded unhappy with the decision not to hold a re-do of the primary.

"Today's announcement brings us no closer to counting the votes of the nearly 1.7 million people who voted in January," deputy communications director Phil Singer said in a statement. "We hope the Obama campaign shares our belief that Florida's voters must be counted and cannot be disenfranchised."

Obama's campaign said it hoped the decision would lead to a fair seating of the Florida delegates at the convention -- though what's fair for Obama might not be viewed that way by the Clinton campaign.

Clinton won Florida's January primary with 50 percent of the vote to Obama's 33 percent, though neither candidate really campaigned in the state.

"Now we're looking at yet another set of disenfranchised Florida voters and you know that leaves a bitter taste in the mouth we don't want to go back there. ... 2000 may seem like a long time ago but not around here," Roberts said.

So now what? It's back to the original problem.

Either the party accepts the results of the botched primary -- and Clinton picks up valuable delegates -- or it sticks with the punishment, and the nominee is chosen without any input from the 1.7 million Florida Democrats who turned out in January. E-mail to a friend