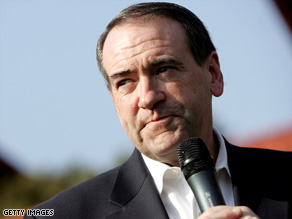 The Dallas Morning News says Mike Huckabee is "a good investment in the Republican Party's future."

Though Sen. John McCain of Arizona is the presumptive nominee and "it is mathematically impossible" for Huckabee to pull ahead in delegates, Huckabee "remains our choice for the GOP nomination," the newspaper's editorial board wrote, just two days before the state's primary.

This is not the first time the paper has endorsed Huckabee. Last month, it called him a "a progressive conservative with a pastor's heart."

And in December, it called him "decent, principled and empathetic to the views and concerns of others -- an antidote to the power-mad partisanship that has led U.S. politics to a dispiriting standstill."

In the piece published Sunday, the newspaper's editorial board wrote, "True, a Huckabee vote today won't do much to determine the 2008 GOP presidential candidate."

It added, "But it's a good investment in the Republican Party's future."

McCain has 1,033 delegates to Huckabee's 247, according to CNN calculations. A candidate needs 1,191 to seal the Republican nomination.

McCain appears to hold a comfortable lead in Texas. Recent polls indicate he is the choice of 58 percent of the state's likely Republican voters, while Huckabee trails with 30 percent.

McCain, who spent more than five years as a prisoner of war in Vietnam, has "long experience and personal courage" and "a solid record of fiscal responsibility," the newspaper said.

It added that he "has been on the right side of campaign finance reform and environmental issues" and credited him as "correct and principled to lead the fight for comprehensive immigration reform last summer."

But the board added that McCain's age, 71, "and his choleric temperament gave us pause, particularly when contrasted to Mr. Huckabee's sunny-side-up brand of conservatism."

The paper lauded Huckabee's views on the environment and described him as "a compassionate conservative" on economic matters.

"Though his social and religious conservatism puts him on the wrong side of abortion, gay rights and other key issues, that same deep-faith commitment inspires his dedication to helping the poor and to racial healing," the board said.

Huckabee's youth, pragmatism and "good-natured approach to politics" mean he could play a role in GOP politics for many years, the paper said.

"That's why we encourage Texas Republicans to mark their ballots for Mr. Huckabee in the GOP primary: to demonstrate to the party's elite that Mr. Huckabee and his vision have a solid constituency."