WASHINGTON (CNN) -- The Army's chief of staff told a Senate panel Tuesday that combat in Afghanistan and Iraq has left "our Army out of balance, consumed by the current fight," and could affect troop levels in the near future. 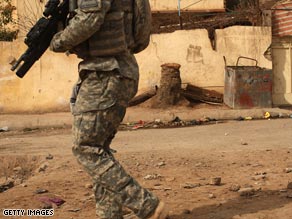 A soldier patrols in Diyala province in Baquba, Iraq.

"[We are] unable to do the things we know we need to do to properly sustain our all-volunteer force and restore our flexibility for an uncertain future," Gen. George Casey said.

Casey testified before the Senate Armed Services Committee along with Peter Geren, the secretary of the Army.

Casey said the goal is to reduce combat tours from 15 months to 12 months by midsummer.

He said that if Gen. David Petraeus, the top U.S. commander in Iraq, "is able to execute the announced plan of getting to 15 brigades by July, it would be our goal at that point to return to 12 months vs. 15-month deployments."

The testimony revolved around the defense authorization request for fiscal year 2009 and the stresses and challenges faced by troops.

Geren, urging senators to support the $141 billion requested by the Army, said he wants to "ensure that our soldiers have what they need when they need it."

"We are a nation long at war, facing an era of persistent conflict," he said. "Our soldiers and families are stretched. We are an Army out of balance. And we are consuming our readiness as fast as we build it. But our Army remains strong. It's stretched, it's out of balance, but it's resilient." E-mail to a friend