(CNN) -- Craig Weatherby of Adrian, Michigan, is a Democrat, but he voted for a Republican for the first time in his life during Tuesday's primary election. 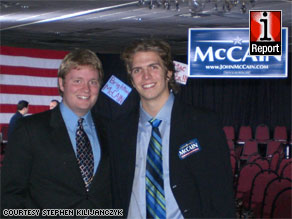 Weatherby said he was unhappy that the Democratic Party decided to strip Michigan of its Democratic delegates after the state's primary was scheduled earlier.

"If, God forbid, the Republicans get in office, I would like to at least have a say in who I get to have among the choices," he said.

Linda Gerzetich of Jackson, Michigan, an Independent who voted for Republican Mitt Romney, also said she was disappointed by the election and added that she felt Michigan had been overlooked by Democrats.

"I vote for whoever I think will do the best job," Gertzetich said. "I feel that the Democrats said, 'You're moving your primary up, so you don't count,' and I think that's wrong."

Huckabee supporter Jennifer Holland of Chesterfield, Michigan, said it was OK with her that many Democrats had pulled out, but she was unhappy with the voter turnout in general.

"I'm kind of disappointed," Holland said. "Everyone has big opinions about who needs to get elected, but no one went out to vote in the primary."

Stephen Kilijanczyk, 23, of Canton, Michigan, a McCain voter who helped at a rally for the candidate prior to the election, said he thought younger voters were turned off by the election.

"Most of the younger kids, I think they want to vote for [Sen. Barack] Obama," he said. "He's not even on the ballot at all."

Readers had a lot to say about the Michigan primary and its outcome. Below is a selection of the responses received, some of which have been edited for length and clarity:

Craig Weatherby of Adrian, Michigan
I am a 61-year-old lifelong Michigan Democrat who is furious with his party that essentially told all Michigan Democrats that their presidential candidate opinions don't matter and their votes won't count in this Michigan primary. For the first time in my life I voted Republican, where choices exist and votes count!

Linda Gerzetich of Jackson, Michigan
I voted today. There are over 10 million people here in Michigan. Don't we deserve to be recognized be the Democrats? Are they scared of how we may vote?

Doug Bader of Grand Rapids, Michigan
With the foolishness of this state's party leaders in trying to move the primary earlier rather than allow us time to review and consider candidates in a mature fashion, the Democratic primary is meaningless. Therefore, I, as did many of my friends, crossed over and voted on the Republican primary. (Although it was a little strange saying the name of the party of repression, massive deficits, secretive government and curtailed individual rights.) After consideration with friends over who was the biggest bozo running for the Republican nomination that had the chance of actually getting the nomination and would be the easiest for the Democratic candidate to beat in the general election, my friends and I voted for Huckabee. He's got enough push from the nutball reactionary right to get the nomination and is such a big joke to anyone left of Mussolini that everyone from truly conservative (not reactionary) Republicans to the most radical leftists (if there are any yet to be found in this country) will vote Democratic, if only out of fear of what Huckabee would do as president.

Jeff Hill of Scotts Valley, California
Tuesday was a day of shame for the Democratic Party. For decades they have supported measures to enable everyone to register to vote, even your dog and cat, and any illegal alien who can fill out a postcard. On Tuesday they disenfranchised every Democrat in the State of Michigan because Howard Dean was in a fit of pique over the date of the Michigan primary. So much for expanding the franchise to vote. Shame!

Steven Rinehart of Denver, Colorado
Romney seems to do better in states without evangelicals or independents (independents had to register Republican to vote in Michigan). In votes where solid Republicans vote, Romney will thrive, especially in the West where Mormons are mainstream.

Sean Stimac of Marquette, Michigan
Today I voted in Michigan's primary election for Ron Paul. I went during the lunch rush and was disappointed in the turnout I saw. It took less than 10 minutes to get verified, get a Republican ballot, and vote. I did not have wait in any line.

Considering all of the topics on the agenda for this years presidential election, I expected more people to be involved. It's disappointing how many people do not care or are too lazy to cast a vote. Our next president has some very important issues to cover in his/her next term and Americans don't care who has to take care of them.

Shame on you voters! Get out there and make things happen. This is your government, stop giving it away! By not voting you just encourage endless cycles of cynicism. Things will never change if your too cynical to vote. Muster some courage and take back your country!

Dorothy Schwartz of Boca Raton, Florida
I am voting in Florida's primary but unless the National Democratic Party allows my voice to be heard in the selection of the Democratic candidate, I will not be voting in November.

Tim Holland of Alpharetta, Georgia
Sad to see that people are voting for a fictional thought put out by Republicans that manufacturing jobs will indeed return to Michigan while ignoring the person who is telling them the truth that those jobs are long gone, and we need to retrain our workforce for the next generation of jobs. If voters are not convinced, just look back and think about all the jobs around the clothing industry. Did they ever return. In hindsight, are we more better off that they did not return? E-mail to a friend