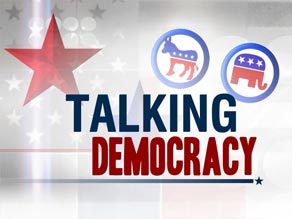 Use these questions to test your knowledge of the presidential election process, then check the answers to see how you did.

Delegate-hunting can be a mathematical challenge, but CNN's Jill Dougherty says it adds up to American-style democracy.
• Right to Vote

CNN Student News explores the right to vote, and an iReporting classroom chimes in with reasons to exercise it.
• Political Parties 101

Discover some of the differences between the Democratic and Republican parties.
• Campaign Finance 101

Check out some of the rules concerning cash for presidential campaigns.
• Polling 101

Discover why a random sampling is an important aspect of an opinion poll.
• Conventions 101

CNN Student News takes you behind the scenes of the national political conventions.
• Debates 101 The candidates face off as CNN Student News provides the background and backdrop for presidential debates.
• Electoral College 101

Why delegates matter in the presidential race Click through this interactive for an explanation of the different types of delegates and how they are chosen in the nomination process for the Democratic and Republican parties.

Electoral Map Calculator Use this Electoral College map to examine how the presidential candidates may fare in November's election, based on analysis from the CNN Political Unit. Then call the race yourself! Click on a state, choose a winner, and watch the electoral votes add up.

Cable in the Classroom's eLECTIONS campaign simulation Make all the decisions for a virtual run for the U.S. presidency, allocating budget, selecting key issues, choosing where to campaign, and responding to the opponent's moves and other external events.

Debate Quiz How much do you know about debate history? These questions will test your knowledge and include video of some memorable moments in presidential debate history.

Students can demonstrate their understanding of election-related topics by sending in their own Talking Democracy iReports. Click here for information on how to send in iReports.