(CNN) -- Desiré Henriksen feared that there would be no Christmas for her two boys. She had lost her job at Denny's, where she worked the graveyard shift. Her fiancé, who works as a glazier, was having a hard time finding regular work. And the couple fell behind on the mortgage last month. 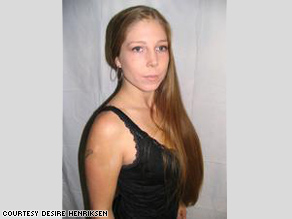 Desire Henriksen decided to sell her hair after losing her job and falling behind on her mortgage.

So Henriksen, of Phoenix, Arizona, cut her hair and sold it on the Internet to a hair trader in the Netherlands.

"Everyone was telling me how beautiful my hair was," the 27-year-old said. Her friends suggested that she sell it.

"We're trying to keep our place here," she said. "We don't want to become like people right now who are losing their homes."

With the economy squeezing the budgets of more Americans, some people are looking for creative ways to pay their monthly bills. Selling hair on the Internet is just one of those unusual methods.

"We've seen about a 20 percent increase in the last four months," said Jacalyn Elise, co-founder of TheHairTrader.com, referring to the number of ads offering hair for sale posted on her site. "These days, some people are just in need of money."

Henriksen was paid $1,200 for 27 inches of her tresses. But most hair is sold for about $300 to $900, says Marlys Fladeland of Hairwork.com. The hair is used to make wigs or hair extensions or is used in artwork.

The longer the hair, the more it is worth. Untreated hair is also likely to fetch a higher price, Elise says.

For Henriksen, cutting her hair was always in the cards. But she had planned to give it to a nonprofit organization that provides hairpieces for children who lost their hair after cancer treatments.

"Initially, I had grown my hair out to donate to Locks of Love in memory of my mother, who passed away from cancer last year. I was going to try to give back to people who didn't have any hair. But it didn't work out that way. Instead, I got my kids Christmas [gifts]," she said.

In addition to buying presents for her 10-year-old son and 3-year-old stepson, Henriksen paid off the overdue mortgage bill.

She was so pleased with how easy her hairy business deal was, she says she's planning on growing her hair out again and selling it on TheHairTrader.com to help pay for her wedding.

Clough estimates that he brought in $28,000 this year by participating in seven medical trials, having his blood taken 500 times and ingesting about a dozen medications.

The Austin, Texas, resident has tested everything from cholesterol-lowering drugs to hepatitis C and HIV treatments. He even set up a Web site, Just Another Lab Rat, which explains how and where to volunteer.

Clinical research requires testing drugs on volunteers to determine whether the drug is appropriate for the market. The test subjects may be required to stay at a clinic or may have to visit the clinic a few times. Depending on the clinic and the trials they participate in, they may be paid $50 to $5,000 each time. Trials can last 10 days to a month.

Safety concerns include side effects or drug reactions, but for many volunteers, the payout outweighs the risks.

"Some people live study-to-study," Clough said. "They have immediate bills to take care of. And a lot of times, when people don't get into the study, they are concerned about how to pay those bills. They don't know what they're going to do."

"Five years ago, it was mostly students," he said. But today, he sees "Realtors, taxi drivers. ... It's any walk of life you can think of."

Your personal gold mine

Jeweler Les Harrell of Littleton, Colorado, struck gold when he had the idea to give people cash for their gold -- at parties.

It started out as a fundraising event. But seven months later, he has a Web site, Gold Exchange. He's hired three employees, and he's throwing gold parties seven days a week.

Friends and neighbors assemble to swap gossip, have drinks and get their jewelry appraised. Harrell pays cash on the spot for folks willing to hand over their gold. Later, he sells it on the market. He has operations in Colorado, New York and California.

Deanna Molinaro was skeptical when she was invited to one of Harrell's gold parties this summer. But the Denver, Colorado, resident changed her mind after walking away with $700 for a wad of tangled gold bracelets, a herringbone necklace and some mismatched earrings.

"I was floored," she said, when she first heard about the cash. "I made a lot of money on things that were lying around in my jewelry box for 20 years."

Harrell says he typically pays $5,000 per party, not including the cut the hostess makes and the referral fee. And it's not always jewelry he's appraising.

One item he remembers fondly: Uncle Louie's bridge. "It weighed almost 2 ounces," he said with a hint of amusement.

People have, on average, about $300 worth of gold just lying around, Harrell says, and liquidating that hidden treasure can help them balance the family budget.

Harrell's parties were initially geared toward the upper class, but his clientele is changing. "What was fun money becomes, 'Oh, my gosh, this is a big help,' " he said.

In reality, a drawer full of costume jewelry, broken chains, errant earring backs and muddled memories may turn out to be next month's heating bill.

One woman, living alone on Social Security, recently turned over a shoebox full of jewelry to Harrell to see what, if anything, she could get for it.

"She really didn't know what was real or not," related Molinaro, who helped with the transaction. But she cleaned out everything she had. In the end, her shoebox was worth $350.