Rising costs could push college out of reach

(CNN) -- The cost of attending college has risen nearly three times the rate of the cost of living, and could eventually put higher education out of reach for most Americans, according to a National Center for Public Policy and Higher Education report released Wednesday. 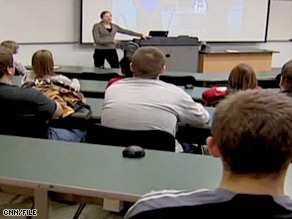 The price to attend college, adjusted for inflation, rose 439 percent from 1982 to 2007, according to a report.

The problem could affect the United States' global competitiveness, the center said in its biennial report.

"College tuition continues to outpace family income and the price of other necessities, such as medical care, food and housing," the center said. College tuition and fees, adjusted for inflation, rose 439 percent from 1982 to 2007, towering over increases in medical care, housing and food, according to the report. Median family income rose 147 percent during the same period, the report said.

In Austin, Texas, Tony D'Addeo, a high school senior and straight-A student, hoped to attend an Ivy League school, paid for with his parents' stock options.

But the options, once worth several hundred thousand dollars, are now worthless.

"I think a lot of families -- lower class and middle class -- are having to readjust their plans and goals," said D'Addeo, who is now looking at a state school or possibly signing up for an ROTC program to cover college expenses.

Watch how the economy is affecting students' college plans »

The report gave a failing grade in affordability to all states but one, California, which received a "C."

"The nation's colleges and universities have become less affordable for students and their families since the early 1990s," it said. "This year continues the trend in deteriorating college affordability in the majority of states."

See how tuition has risen in comparison to other prices »

In most states, the percentage of an average family's income used for a public four-year college -- after financial aid -- has increased, the report said. "On average, students from working and poor families must pay 40 percent of family income to enroll in public four-year colleges. Students from middle-income families and upper-income families must pay 25 percent and 13 percent of family income, respectively."

Watch how the affordability of college is getting tougher in the U.S. »

In addition, students who enroll in college take on more debt to stay there.

"Over the last decade, borrowing has more than doubled," the report said.

"The process is time-consuming, and there's also the stress of having to liquidate my investments and wonder where I'm going to find money," said Hahn, who had to scramble to find a new loan earlier this year after his lender suspended its private loan program.

Hahn is now borrowing money from Sallie Mae, the country's leading student loan provider. He estimated it will take him five to seven years to repay about $30,000 he will borrow. Read full story

The researchers said states are struggling with substantial budget shortfalls, a consequence of the lagging economy.

The soaring cost of college is on the political radar of President-elect Barack Obama. He has promised to create a new American Opportunity Tax Credit worth $4,000 in exchange for community service, according to the Obama-Biden Web site. Recipients of the tax credit would be required to conduct 100 hours of community service.

Obama also promised to streamline the financial aid process. Under Obama's plan, families would apply for financial aid by checking a box on their tax form, which would authorize their tax information to be used, and eliminate the need for a separate application.

The United States made modest advances in some areas of education, but the rate of enrollment and completion for college is below other countries, the report found. The 34 percent of young American adults enrolled in college puts the United States behind Hungary, Belgium, Ireland, Poland, Greece and Korea -- which ranked the highest, with 53 percent.

Nearly 40 percent of older Americans, ages 35 to 64, hold an associate degree or higher, putting the United States second in the world in that category, behind Canada's 44 percent. But the United States ranks 10th in the world for percentage of younger adults holding those degrees -- 39 percent -- far below Canada, which has the highest at 55 percent.

All About Colleges and Universities