How to bring a shy guy out of his shell

(The Frisky) -- Whether it's sitting in silence during dinner or enduring the long, uncomfortable pauses when he's out with you and your friends, dating a shy guy can create some incredibly frustrating situations. 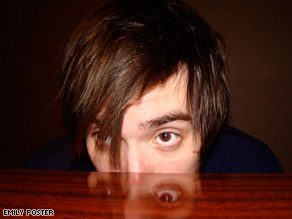 If you're seeking out his expressive side, try meeting up with him on his turf, an expert suggests.

What you might not realize, however, is that inspiring an introverted date to open up is surprisingly simple.

"With a shy guy, you have to take the lead more often," says Diana Kirschner, Ph.D., a recurring guest psychologist on "The Today Show" and author of "Love in 90 Days: The Essential Guide to Finding Your Own True Love". "It may seem like a challenge, but once you give him a few little pushes in the right direction, he'll open up to you with ease."

Here are a few of Kirschner's hints on how to encourage your guy to take a walk on the wildly talkative side:

1. See him when he is in his element

When a shy guy is in his element, odds are he's feeling pretty self-confident, which bodes well for the likelihood of his opening up.

"If a shy guy feels at ease, he's best able to be charismatic, which often results in his expressing himself not only verbally, but emotionally as well," Kirschner notes.

Therefore, if you're seeking out his expressive side, try meeting up with him on his turf. If he frequents the trivia night at his favorite watering hole, ask to join him and lend your knowledge. Be there as he finishes a marathon, and if he is giving a talk, try to arrange to be in the audience.

"In these scenarios he'll be feeling very good about himself, and this means he will feel empowered to share his thoughts and feelings with you," Kirschner says.

2. Call him by his name or give him a complimentary nickname

When you address your date by his name, you're sending the message that you notice him and that he's important to you, says Kirschner.

"When you refer to your date by name as opposed to addressing him indirectly, it creates a greater sense of intimacy between the two of you," she explains. "As a result, he'll be much more comfortable opening up to you because he'll feel there's more than a superficial connection."

If you're interested in taking this connection to the next level, she recommends choosing a complimentary nickname -- if not for just one moment -- based on one of his qualities that you admire. If he is into cycling, for example, say, "So, Lance, do you like to cycle competitively or just for fun?" This friendly, flirty informality should get him to laugh and, consequently, get talking.

It's no secret that asking open-ended questions is a sure-fire way to produce conversations -- even with the quietest guys. When you toss a few your guy's way, you can't help but get him to chatter away about himself.

Kirschner suggests starting with the basics: "How did you get interested in (your job)?", "What brought you to live in the city?" or "How did you manage to earn your black belt in karate when you work full-time?" Be careful to keep your questioning breezy, however; you don't want him to feel like he's interviewing for a job or being cross-examined on the witness stand.

4. Play the damsel in (slight) distress

Sometimes, all you have to do to get a guy to open up to you is to ask him to fix something for you. "Whether it involves your computer, your car, your bike, your door -- you name it -- men love to help women; they're biologically wired that way," Kirschner asserts.

In coming to your aid, he'll feel much more connected to you, so capitalize on the situation by asking him questions about what he is doing. "When he is in the 'helper' role, he is much more likely to share with you," Kirschner says.

Let's be honest -- who doesn't enjoy a little praise every now and then? When you compliment your guy, it naturally builds his self-esteem, which tends to get him to talk more and possibly even show off a bit for you.

The key to using this tactic, however, is to make sure your compliment delivery is sincere and truly heartfelt; if he senses that all that buttering up comes with an agenda, he'll clam up even more. To ensure your compliments do the trick, Kirschner advises noticing something about him or what he is doing that you really like and then praising it with specific, sincere kudos.

Think "That blog you wrote about going to Sicily was hysterically funny and made me want to go!" or "I absolutely adore your new glasses -- would you come with me to help me pick out some new nerdy-chic frames? I seem to be stuck on 'nerdy'."

6. Find something you have in common...

Then propose to do it together. It's often the hallmark of a shy guy to be very interested in his date, but petrified to make the first move. If you sense your guy likes you and you're feeling him too, kicking your relationship into gear may mean you need to be the one to start things off.

An easy, not-too-aggressive way to do so involves discovering something in which you're both interested, which will create an instant bond, Kirschner notes. Do so by asking him about food, hobbies or other fun activities.

When you discover the fact that you both live for Korean food, ask if he wants to grab dinner at your favorite place next Saturday night, and then let the conversation flow as you munch on kimchee.