Beware catching this from your spouse

(OPRAH.com) -- For better or for worse, when you get married, you sign on for a life of sharing --bedsheets, bathroom space, cold germs. Moods, too, as it turns out. And it's becoming increasingly clear that "emotional contagion," the unconscious tendency to mimic the emotions of others, affects spousal health. 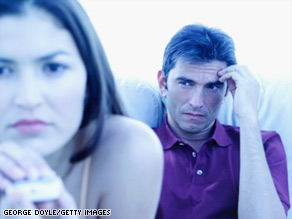 Couples may not realize that "for better or worse" may mean they will share their emotional states as well.

Heart bypass patients with neurotic and anxious spouses, for instance, were much more likely to be depressed 18 months after surgery -- independent of their own personality -- according to one study led by John M. Ruiz, Ph.D., assistant professor of clinical psychology at Washington State University.

The findings are troubling because depression is known to put recovering cardiac patients at higher risk of further heart attacks and death.

Another study showed that hardening of the coronary arteries was more likely in wives when they -- or their husbands -- expressed hostility during fights.

As for how one catches a partner's foul humor, the brain's aptly named "mirror neurons" are to blame, says John T. Cacioppo, Ph.D., director of the Center for Cognitive and Social Neuroscience at the University of Chicago and co-author of "Emotional Contagion."

These neurons fire in response to other people's actions and intentions, especially when you care about the individual. So if you see that your husband is anxious or depressed, you literally feel his pain. There are, however, a few ways to prevent spousal mood infection. Oprah.com: What's really going on in his head!

When he makes a nasty remark and you give it right back, you're off to the races. You can avoid getting stuck in this loop by planning how you will respond to his negativity. One option is to walk away: Take a stroll around the block, go for a bike ride. Once you're on your own, you can see how much your partner's mood is really affecting you. If it's substantial, you might schedule more alone time in your relationship.

Or ask him to exercise with you or visit a therapist (see "Play as a Team") to try to improve his mood. If you're the problem, leaving the premises when you feel a funk coming on is also a good way to keep him -- and the marriage -- healthy.

Let him see the light

His doldrums could be a symptom of seasonal affective disorder -- yours too. If either of you is worse in the winter, cheerier when it's sunny, try installing bright full-spectrum lighting.

Play as a Team

Demanding that he go to a shrink is often not an effective way to motivate him to get help, Cacioppo says. Suggesting that you see a couples therapist together may prove more successful.

Keep your spirits up

People who are content in their relationships are much less vulnerable to a spouse's neuroticism, according to Ruiz's research. On the flip side, in a happy marriage, one partner's optimism may rub off on the other -- an actual health benefit. Did someone say optimism? The good news is, you can catch that too.