Ex-bankers on pushing customers to rack up debt 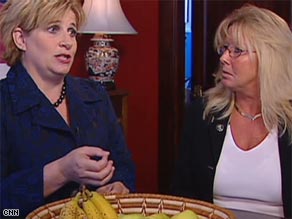 Cate Colombo and Kathy Elllingwood say they were told to use agressive selling tactics to push cash advances.

Kathy Ellingwood did the same. She lasted only a year and a half before quitting this summer.

The women worked in different departments at the sprawling customer call center in Belfast, Maine, yet they share similar stories about aggressive selling tactics they claim they were told to use to push cash advances, sometimes getting customers to max out their credit cards.

"Every customer who calls in is a mark. It's a great big con," said Colombo, who estimates that she alone sold almost a quarter of a billion dollars in the four years she worked for MBNA before it was bought in 2005 by Bank of America.

Colombo and Ellingwood said that within seconds of a customer's call, they would have his or her entire credit history on screen, and they were trained what to say to sell people money.

"I would say 90 percent of the time, people were pragmatic. They would say, 'I don't need $100,000,' and we would find a way to convince them they needed the money," Ellingwood recalled.

She said they would look for trigger words like, "I'm in financial difficulty" or "I can't make my payments." Colombo said other triggers were, "I have to send my son to college. My car is not running. I'm moving."

Colombo said some people even asked about getting a $50,000 cash advance -- usually at zero percent interest -- for a down payment on a house. And although that's illegal, the former employees say they were trained to get around it by saying, "I cannot give you money to use as a down-payment on a home. However, what I can do is, I can deposit some money into your checking account, and once it's there, the funds are there, it's yours to do with what you please."

Bank of America told CNN, "Only customers in good standing and with good payment history are able to access cash up to available credit line."

But Colombo and Ellingwood say they were told to sell hard to everyone. Once the customer agreed, they say, they would speed through intricate disclosure notices. Among the details, how a zero-percent or low interest rate could convert to as much as 28 percent if a payment was even a day late.

"You're basically looking at people who need the money most, who may not be able to afford it," Ellingwood said.

Colombo remembers having a conversation with one man in his 90s.

Bank of America calls its terms "clear and transparent." But credit card lending practices have now gotten the attention of Congress. Consumer groups support a bill to curb what they call predatory lending.

The American Banking Association opposes it, saying, "Consumers have benefited from a competitive marketplace that allows for pricing based upon risk."

Americans for Fairness in Lending, which put CNN in touch with Colombo and Ellingwood, wants deceptive credit card practices included in the financial bailout legislation that is now before Congress.

Its director, Jim Campen, said, "We haven't identified any illegal practices. What we've seen are practices that are highly unethical. It's extraordinarily common."

The two women say their conversations were monitored, and the more they sold, the bigger their salaries.

"If you didn't do it, you got yanked off the phone," Colombo said.

Bank of America said it does not talk about individual cases but calls the allegations by the former employees "incorrect."

Spokeswoman Betty Reiss said, "Our call center associates are focused on serving customer financial needs and responding to questions about their accounts."

But Colombo said her performance reviews -- which she provided to CNN -- tell a slightly different story about selling tactics. In one, she is told by supervisors to be more aggressive: "You cannot sell what you don't offer." Another reads, "Understand the importance of selling at the highest possible rate."

CNN asked whether the customer call center in Belfast was perhaps operating independently; both women shook their heads and described an environment in which call centers across the country would compete with one another.

Although Colombo does not know whether the practices were widely known at Bank of America headquarters in Delaware, she said this about her immediate managers: "Everyone on that level knew what we were doing. We were being told to do what we did."

Do the women feel guilty about what they did?

Americans for Fairness in Lending said it wants the Senate to ensure that consumers are protected from what it describes as the deceptive practices of many of the same financial institutions likely to benefit from the $700 billion bailout.

The Credit Card Bill of Rights passed the House this week. But it's opposed by the banking industry and the White House, which said it would lead to less access to credit and higher interest rates for consumers.

For its part, Bank of America would not talk about individual cases or provide a copy of the disclosures that its accounts managers read to customers over the phone. It also refused to answer questions about training procedures for account managers at call centers across the U.S.

However, the spokeswoman said the bank "has nothing to gain by extending credit to people who do not have the ability to pay back."