Mooching friends -- how to deal with them

(LifeWire) -- During an evening out at a San Francisco bar some years ago, Matt Colling and a friend ended up buying drinks all around. But when it came time to pay the $100 tab, Colling was on his own. 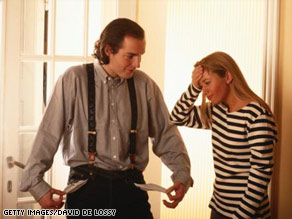 "I pulled out money and I was the only one that had any," the 28-year-old bartender remembers. His friend had conveniently "forgotten his wallet."

Whether it's stiffing drinking buddies with the check, bumming rides, "borrowing" cigarettes or sponging off meals, moochers can push the limits of friendship by making a habit of manipulating others to avoid paying their fair share.

Brandon Ward, a sports marketing executive in San Diego, got an early lesson in dealing with deadbeats. Now 37 and married, Ward readily remembers a former roommate who rarely picked up his fair share, including his portion of a weekend trip that involved four tanks of gas and three cases of beer.

For Ward, it wasn't so much the money as the principle. "He never pulled out his wallet. If he had even offered, there was a chance I would have said no. That was the big sin."

No matter how charming they may be, a friend who mooches isn't really a friend, says Jeanne Fleming, a financial ethics columnist for Money magazine who also holds a Ph.D in sociology. "Moochers are fundamentally motivated by being selfish and self-centered," she says. "They habitually forgive their behavior. But the truth is that it's complete self-indulgence. It's not benign."

From friend to freeloader

At what point does a friend become a mooch? It's a matter of frequency.

"Everybody has at some point asked a friend for 20 bucks and forgotten to pay it back," says Fleming, who researched relationship offenders for a book she co-authored with Leonard Schwarz, her "Money" magazine writing partner. But mooching begins when reciprocating ends. Or maybe when you start asking the tightwad to pick up his fare share of expenses.

When the authors asked 800 people nationwide to choose between a relative hitting them up for a large loan or getting a bad case of the flu, over two-thirds said they'd take the flu. That may be because 36 percent of Americans in the survey had at least one family member who is a moocher, and 32 percent were saddled with a deadbeat friend.

Fleming and Schwarz also questioned 1,000 adults across the country for another survey and found that a whopping 95 percent had lent money to friends or family members. Over a third of those had lent more than $1,000. And the chances of seeing their money again? Forty-three percent weren't repaid in full for the largest loan they ever made to friends or relatives, and 27 percent were never repaid at all.

But mooching isn't limited to money, which can make it harder to know when to draw the line. Take 35-year-old journalist Colin Sullivan of San Francisco. As a writer for Greenwire.com, he says he takes pains to minimize his carbon footprint, and carpooling is a one effective tactic.

But when a close friend adopted a habit of bumming rides -- "He's the kind of guy who would just assume that if we were going somewhere that I would be picking him up" -- Sullivan felt torn between being environmentally responsible and being a chauffeur. Even then, Sullivan chalked it up to his friend being "a tight-ass about money," which he believes isn't the worst fault in the world.

Fleming sees it another way: Cars are expensive to own and operate. "They think they're being green and maybe they are," she says, "but they're also mooches."

Dealing with moochers is tricky even for etiquette experts like Lizzie Post, who keeps an eye on America's "civility barometer" at the Emily Post Institute in Vermont. Even the great-great-granddaughter of America's manners matriarch has had to request repayment for small loans and dinners out. But she, too, understands how it's tempting to let uncomfortable matters slide.

"It's hard because these issues aren't etiquette," she says, "they're more social and relationship issues."

But it's not impossible. Suggestions from the experts include nipping the habit in the bud by learning to say no -- politely -- to loans, tabs and rides. Post advises planning ahead by deciding whose turn it is to pay before you even leave the house. And if that's not possible, you can always ask for separate checks.

If your moocher is a close friend, you may want to give him a chance to change. But a perfectly reasonable response to repeat offenders is to drop the friendship. That may actually turn out to be a favor because mooching is a self-correcting habit, says Fleming. "If a moocher loses enough friends, they modify their behavior."

And that's ultimately how Ward handled his old friend, the deadbeat roommate.

After their one-sided weekend vacation, Ward joined his roommate and others at a local pub for a few rounds of beer. Everyone took turns buying, but when it was the roommate's turn to pay, he was -- where else? -- in the bathroom. The second time he tried the disappearing act, Ward called him on it.

"I don't remember inviting him out again," says Ward.

All About National Economy • Relationships