Nine types of guys to get over immediately

(The Frisky) -- Everybody has a "type." Personally, I like a man with a big schnozz -- bonus points if he's got a collection of acne scars a lá Tommy Lee Jones. 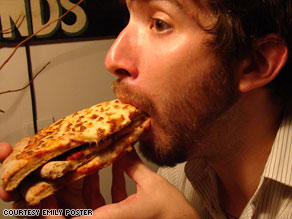 The "OverEater" is one of the nine types of men that women should avoid.

My pal Annie likes preppy men -- but only after they've gone to seed and become a little bloated in the process.

Suzanne has a weakness for thin Japanese guys who like indie rock music, while Maddy adores bike messengers of all shapes and sizes.

But there are certain types of guys who should be NOBODY'S type. These guys are distinguished by one thing -- an overabundance of one or more very bad qualities. Here's your guide to boys to avoid:

1. The OverSharer: The current Overshare Poster Boy is Phillip Nobel, who wrote a highly hide-chapping account of his extramarital affair for Elle. The Oversharer will broadcast intimate episodes from your relationship to his mother, your mother, his blog readers and anyone else he can rope into paying attention.

2. The OverThinker: One of the great things about dating men is that you aren't subjected to long, excruciating interrogations over what you really meant when you reassured him that no, he didn't look fat in those pants. However, though they're rare birds, there are guys who will want to spend hours dissecting even the most innocuous comment, examining it for tone, content and what you might've been implying.

3. The OverTalker: Your friends say they've never known you to be so quiet. That's because this man does enough talking for both of you (and then some). When you do finally eke out a sentence or two he interrupts and talks over you anyway. You have two choices -- accept the fact that you will never speak again or tell him goodbye. Your call.

4. The OverDresser: This dandy makes Gossip Girl's Chuck Bass look sloppy and mismatched. That he takes longer than you to get ready is strike one against him, but the fact that he matches his socks to his underwear and to his ascot drives him out of the park.

5. The OverEater: It's an irritating fact that men can eat more than women. The overeater doesn't care. Food is his first love and he'll push cannolis and baked ziti on you like a crazed Italian granny. Unless you don't mind a future spent in stretch-pants, you might want to give this dude a pass.

6. The OverReactor: Remember when Russell Crowe threw a phone at that hotel clerk who somehow displeased him? That's this guy. From the old lady who accidentally bumped into him at the grocery store, to the SUV that cut him off on the highway -- everyone in his path will hear his wrath. You, most of all. Do not walk away -- run.

7. The Over-The-Topper: He's the life of the party and thinks nothing of driving his motorcycle through the bar if he thinks it'll get a laugh. He's certainly cute, but he just never stops. He's always on. And that, will quickly turn into a turn-off.

8. OverAchiever: Picture the male version of Tracy Flick in the movie "Election" in perfectly fitted jeans, a crisp white oxford shirt and a copy of his (perfect, naturally) SAT scores in his wallet. Now imagine making love to him. You can't, can you?

9. The OverCompensator: Maybe he was the homeliest kid in his eighth-grade class, but that doesn't mean you need to sit through a monologue about how much money he makes, how jealous his friends are over his new BMW, and how he totally could date supermodels if he wanted to. Next!