The 8 worst apologies ever

(The Frisky) -- Despite what that old chestnut love story will have you believe, love doesn't mean never having to say you're sorry. 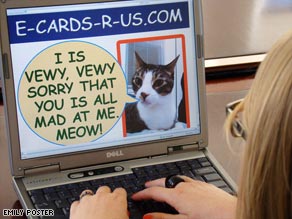 Few occasions warrant an e-card. Screwing up and begging forgiveness is not one of them.

In fact, one of the most important components of any relationship is the ability to suck it up and apologize every now and again.

It's hardly brain surgery, but who among us hasn't been the recipient of an apology that wound up making you feel even worse than the original transgression?

For something that's basically a no-brainer, there's a bevy of ways to get it very, very wrong.

In fact, the late Randy Pausch's bestseller, "The Last Lecture," has an entire chapter called "A bad apology is worse than no apology."

Now granted, men are definitely more prone to the botched apology (see John Edwards, Bill Clinton, etcetera), but we ladies have also been known to blow an act of contrition on occasion. Here are some apology strategies to avoid:

Witness the number one worst way to say sorry of all time: "I'm sorry you feel that way." Interesting game plan -- blaming the person you're ostensibly making amends to for getting rightfully pissed off at your horrendous behavior. If you're not sorry for your actions, don't apologize. If you are genuinely repentant, take off the training bra, squeeze 'em into the underwire, and take responsibility like a woman.

2. Lady liquor made me do it

So you had a little too much to drink at a friend's birthday party and ended up making out in the bathroom with the bartender. When your boyfriend finds out, it's probably best to just own up to the mistake rather than say, "But I was drunk!" Those five shots of tequila only gave you the courage to do something stupid and regretful, it didn't actually do it for you.

What I wouldn't pay to be a fly on the wall the first time some cheater tries to use the new study showing that some men have a genetic predisposition towards non-monogamy. Sorry ladies, so far there's no equivalent study for us female types, so don't even think about it.

"You have to forgive me -- you must!" Demanding absolution is possibly more annoying than your original sin. This is a lose/lose.

An acquaintance's wife apologized for sleeping with a coworker with the caveat, "But he came onto me!" So obviously she had no choice but to cozy up. Oh, please. Inserting the word "but" into any apology immediately negates it.

A boyfriend once "apologized" for standing me up by ruefully rambling on about how his tragic childhood left him ill-equipped to deal with obligations. What this had to do with blowing off dinner still eludes me. You're supposed to be making a plea for forgiveness, not hosting a pity party for one.

There are very few occasions that warrant an e-card. Screwing up and subsequently begging forgiveness via an animated teddy bear and a terrible jingle is definitely not one of them.

"I'm sorry I hurt your feelings," is not the same as "I'm sorry I cheated on you with your best friend, in your bed, while you were at your uncle's funeral." Though either way you phrase it, I wouldn't hold my breath waiting for forgiveness on that one.