(The Frisky) -- Back when our moms were on the market, they could tell right off the bat if the foxy soda jerk was unavailable because back then married men never went anywhere without their rings. 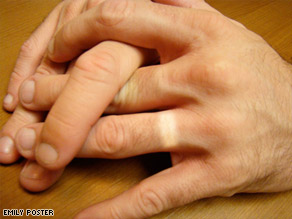 The pale band of skin is a sign he usually wears a band of gold on that left hand.

Not that a band of gold would necessarily keep a cad from straying (see also, "Mad Men's" Don Draper), but at least a lady could make an informed decision about whether or not she wanted to wander into "other woman" territory.

Nowadays, it's not so easy to tell who's taken. Lots of married men don't bother with rings and loads more just live with their significant others in a slightly more informal (though generally no less committed) cohabitation situation. I'll spare you the moralizing, but I'm here to tell you that being someone's girl on the side is a sucker's game.

So who's a lady to hit on? Not only is it harder to figure out who's on the market, a combination of factors -- namely the Internet and mobile phones -- have made it easier for the sneaky guy to disguise his relationship status. A reluctance to hand over the home digits used to be an immediate sign, but now everybody's got cell phones.

So here are some clues a woman on the prowl can look for:

There is possibly nothing cheesier on the planet than the married dude who slips his wedding ring into his pocket during a night out with the guys. Especially obvious during the summer months -- the pale white tan line is an obvious tell. Sure, you can let him buy you a drink, but wouldn't you rather bust his chops?

This is not a slam on genuinely sweet single guys out there, but it's a proven fact that men who are otherwise engaged are approximately a bazillion times nicer to women they're trying to cheat with. They're full of compliments, cocktails and crap.

Men who won't post a photo of their face with their online personal ad will say they're just trying to be discreet (wouldn't want anyone at work to find out!) but nine times out of ten the only person he's trying to hide from is the woman who wakes up next to him each morning.

Don't you find it odd that the only one of his "friends" you met is that creep who hit on you the minute your man went to the loo? That's probably because he's too scared to bring you around his normal friends, who will either scold him for cheating or blow his cover.

He's in constant communication with you -- but only via text. When you call him at night, he doesn't pick up, instead texting back, "WUT UP?" WUT UP is that he's sitting next to his real girlfriend or wife.

Even the smoothest operator needs to keep the home fires burning, so your relationship will be peppered with unexplained absences.

If your new man always insists on going back to your place, chances are he's either shacked up with someone or (and this is possibly worse) still living with his parents. Mission abort!

Judy McGuire is the author of "How Not to Date" (Sasquatch Books), and for the past eight years, has been writing a funny sex and love advice column called "Dategirl" for the Seattle Weekly.