(CNN) -- Ricky Murray was having a miserable year long before a storm named Gustav started threatening the Gulf Coast area. Now he's afraid he will lose his family because of a previous hurricane. 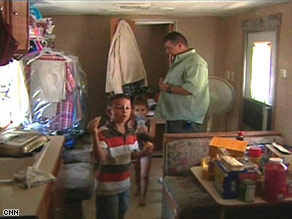 Ricky Murray, his wife and their three children live in a few hundred square feet of a FEMA trailer.

It has been three years since Hurricane Katrina killed more than 1,800 people, scouring Mississippi beach towns down to bare sand and rupturing the protective levees around New Orleans, Louisiana.

Eight feet of floodwater left Murray's home in Slidell, Louisiana, uninhabitable. He's been working on the house, but he and his wife and three children have been living in a FEMA trailer.

Murray also lost his job. He recently suffered a heart attack, brought on in part by stress, according to doctors. But what's really agonizing for him is that his wife of 16 years says she is considering a divorce.

"My whole life is my wife and my kids," Murray said.

Louisiana has kept figures on almost everything Katrina-related: the number of people who died, the number who were injured and the houses that were damaged or destroyed.

But the state is not keeping statistics on the number of divorces in a post-Katrina world. iReport.com: Has Katrina impacted your relationships?

Murray blames the hurricane for troubles in his marriage, saying, "Her and I never argued, never fought, never nothing until this hurricane, until we got cramped in that FEMA trailer."

His wife, Iris, wouldn't talk on camera but did say, "Everything is unstable. The kids aren't being raised right because they don't have the proper space."

Murray says it's not for lack of his effort, but his limited finances have kept the family stuck in the trailer while he tries to renovate the house.

"I have busted my butt over the past few months just to get this side of the house functioning," Murray said. "I have done everything I can to try to keep my family together, then I had a heart attack -- what, a year ago -- inside the FEMA trailer."

Murray says the couple has tried counseling and turned to their church, but the reality is that he could lose everything.

"A lot of people that we grew up with, that I know, have split up, divorced or went on their way because of this hurricane," Murray said.

The couple is getting help from the faith-based group Volunteers of America through Kay Taylor, an outreach worker for the organization.

Overall, she says, couples are more argumentative, and domestic violence is up, as is the suicide rate in the region.

"You have to wait, you have to take help when it's there, and sometimes that means getting on a waiting list," Taylor said.

In New Orleans, Pastor Ray Cannata decided to take a job at a small Presbyterian church just a week before Katrina.

Cannata says he has been spending more time than ever providing couples counseling.

"Pre-existing problems that people are able to sort of ignore and work around come to the surface and have to be dealt with, " Cannata said.

In many cases, sadly, he says, people choose to walk away rather than work through problems.

Murray says he appreciates the FEMA trailer but says it is like living in a "sardine can."

He's of Italian descent and says he doesn't believe in divorce.

His great goal is to finish his home, and he hopes the new space will convince his wife that they can work through their problems.

But the reality is, his wife could pursue a divorce.

"She could; there's no doubt," he said. "It's been very hard on her. I am trying to accommodate in every way possible."

All About Hurricane Katrina • Marriage • Hurricanes and Cyclones