'Can't we be friends?' Mending a broken heart

(OPRAH.com) -- A young man I know, still in love with his girlfriend, tried to go along with her plea to remain friends after she told him that she wanted the freedom to see other men. 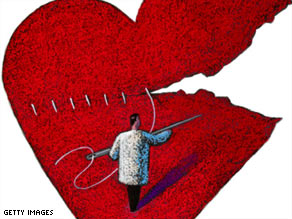 A couple of months later, she invited him to her birthday party. In the course of the evening, while searching for a bathroom, he saw her through an open bedroom door passionately kissing another man. Feeling deeply hurt and angry, he later confronted her, whereupon she retorted, "But we said we'd be friends."

The girlfriend's response seems lacking in empathy and concern -- traits we usually associate with friendship -- but one wonders whether the young man wasn't setting himself up for a fall in the first place.

"Can't we be friends?" It's an old refrain, ready-made for the one who wants out of a relationship to deliver to the one who doesn't. Frank Sinatra gave it a permanent place in popular culture with the song "Can't We Be Friends?" ("This is how the story ends / She's gonna turn me down and say / Can't we be just friends?") Sinatra, who never backed away from melancholy (at least in his music), understood a thing or two about mourning. Oprah:com: Stuck in the past? How to move on

And mourning is the theme that matters here. Trying to be friends immediately following a breakup tends to prevent the rejected partner (and maybe both partners) from mourning the death of romantic love -- from accepting its finality by suffering it all the way through.

As painful as this can be, it ultimately performs an essential function. Behind the tears, mourning has silent work to do: It binds up the torn places where love was and gives them a chance to heal.

This is crucial because falling in love carries us beyond our customary limits of self-expression into territory that puts our sense of self at risk. Two people in love place much of themselves in each other's hands for safekeeping; that kind of interdependence is why the loss of an intimate partner entails the depressing experience of being left behind with a diminished sense of your own existence.

Grieving the end of a relationship is a gradual process of extracting the "I" from a vanishing "we." It provides a way -- the only way -- to retrieve what you invested in a lover or spouse who has departed. Mourning is like casting a line into dark waters and trying to reel in those parts of yourself that you surrendered to the relationship before they, too, disappear.

Although friendship just after the split may offer temporary relief, it blocks the slow but necessary passage from loss to restoration of independence. Oprah:com: Meet women who started over and found their true calling

It took extensive work (and many tears) before she was able to see that the unparalleled sexiness she attributed to him was in fact the power of her own sexual desire. At this point, his image began to lose its magnetism for her.

What her experience suggests is that if you give in to mourning, unsettling though it may be, it will eventually finish its work. Only then do you again become free to fully inhabit your present life and turn from a sorrowing fixation on the past to the exciting unknown of the future.

All human development entails suffering losses that need to be grieved. At every stage of life, we are propelled beyond familiarity and security into a new situation: A baby's first steps mean that she will soon leave behind the comforting security of being carried. A young adult going off to college feels the thrill of freedom but has to contend with homesickness. For all the important gains, there are also losses that bring up anxiety and sadness. Grief might be thought of as the growing pain of human development.

A child's love is really no different from dependence, and that equation haunts us to some degree all our lives. The residues of early dependence in all our intimacies play a large part in making the loss of love so hard to bear. Yet we all go through such loss, leaving behind a trail of casualties -- outdated selves, broken promises, lovers we realize we chose for the wrong reasons. Mourning these helps change what can seem like failures into wisdom.

In learning how to grieve our losses, it doesn't help that American culture, with its emphasis on romantic love and happy endings, isn't very hospitable to mourning. But when we enter into the deeper and more difficult stretches of loving, Hollywood can't shield us from the truth: All love stories come to an end, even those that last a lifetime. When loss hits us hard, it can be difficult to know what to do with it or even how to bear it. Many people in grief turn to antidepressants, which may reduce the pain but don't necessarily provide much by way of self-discovery.

Mourning teaches us how to accept the end of love and helps us start the process of feeling whole again. True, the self you get back is never quite the same as the self you relinquished to your relationship; although wounds can heal, they leave scar tissue. But there's more to gain than just surviving the breakup; there's also the possibility of becoming more than you were, more able to undertake the experience of love in its moments of sadness as well as joy. As with any art or skill, the only way grieving can be learned is through practice -- whether we like it or not.

Michael Vincent Miller, Ph.D, is the author of "Intimate Terrorism"